Attending WrestleCon was a last minute decision, but it was one I won’t regret in the least! After battling long lines in an uncomfortably warm and packed ballroom, I was able to meet not one but five of my favorite wrestlers1, two of which I’ve previously met. I was a bundle of nerves because I went with the goal of meeting some of my favorites from New Japan, but I also didn’t want to bungle my Japanese up either! Butterflies didn’t win out this time because I channeled my own Iron Will to keep my calm… well, for the most part! 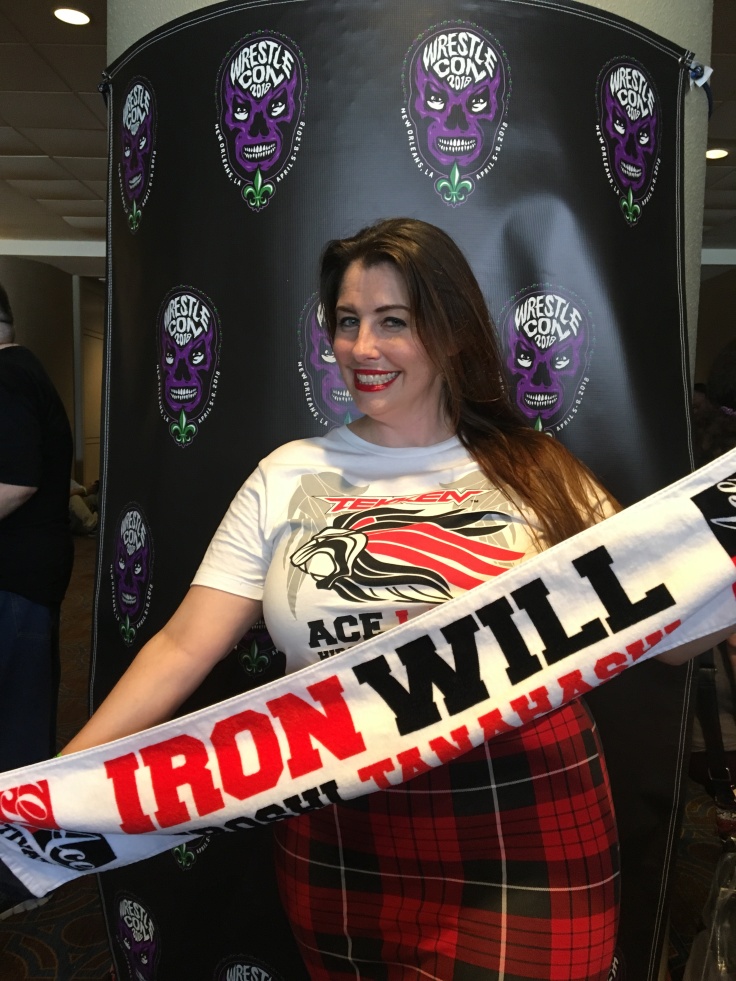 Going to WrestleCon was a last minute decision which I did not regret in the least!

I am the first to admit that I completely missed out on New Japan Pro Wrestling (NJPW) when I lived in Japan from 2003-2008. I had the opportunity to learn about one of the greatest wrestling franchises outside WWE, and completely missed the boat. At the time, I was burnt out on the WWF Attitude Era and its portrayal of women, which unfortunately made me write the sport off entirely.

The most difficult part about patiently waiting for the Golden Lovers meet and greet was wait. Unfortunately, we had to stand in line for 90 minutes prior to ensure that we didn’t spend the entire, slim block of time the New Japan talent was available (11A-2P) waiting to meet them. WrestleCon underestimated the crowdsize, so the room was uncomfortably packed and hot.

I’ve met Kenny previously at CEO last summer and also at Ring of Honor: Sunshine State  Excellence (Lakeland) in the fall, so I was rather calm about meeting him and Kota. When it comes to meeting professional athletes or celebrities, it is quite easy to get starstuck, but Kenny has this uncanny ability of talking with people as if they’re long time friends, so it quickly dispelled any butterflies. It’s always a pleasure talking with him, but with the massive line of increasingly impatient fans, I kept it short. 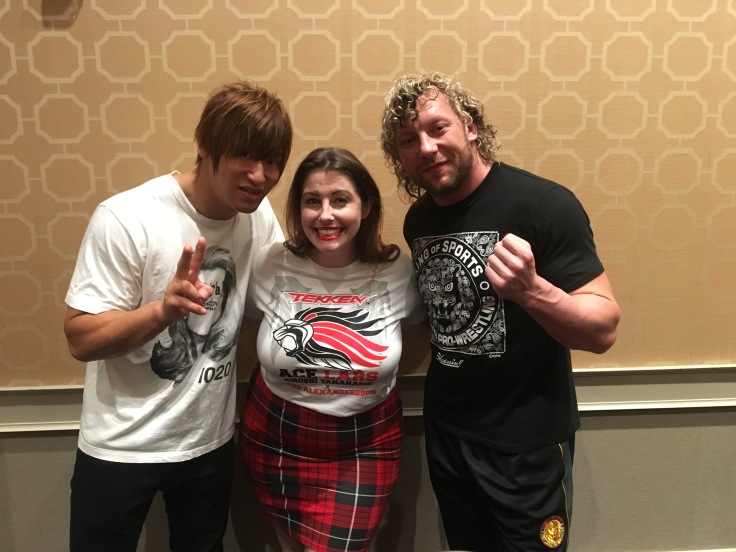 I had seen Kota at the Cruiserweight Classic in 2016, but I never managed to meet him. Even though I’ve been back in the US for nearly ten years, when I interact with Japanese people (or those whom have lived there extended periods of time), I have this tendency to revert to my more conservative mannerisms– I’ll go for a handshake when I normally would go for a hug, I avoid eye contact and nervously play with my hair, and I’ll speak in a higher register (or my “Karen-sensei” voice).

I plucked up the courage to speak with Kota in Japanese, and what should have been a quick well wishing turned into a full-blown conversation. Then Kenny, turned around and peeked over Kota’s shoulder, asking me how I knew Japanese, and then we all started talking. What I wouldn’t have given for five more minutes because talking with them reminded me how much I really, really miss Japan.

Finding My Own Iron Will

After talking with Kenny & Kota, my friends were kind enough to navigate the tightly packed crowd to join me in meeting Hiroshi Tanahashi. He’s one of the most decorated and respected performers in the modern era of New Japan, and one of my absolute favorite to watch. With a rockstar aura and hair that makes just about everyone envious, he is also one of the kindest people. 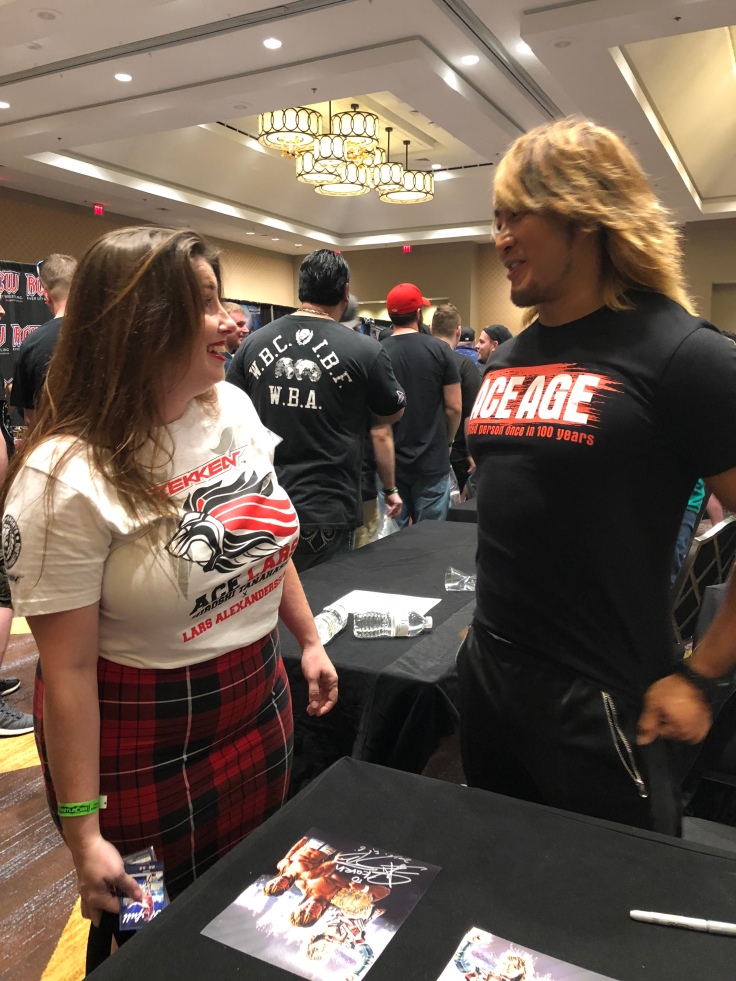 I completely forgot I had his trading card in my hand until I went to pick up the photo!

Outfit of the Day

Earlier in the year, there were rumors that he wasn’t going to make Mania week bookings due to injury, so I was excited when they finally confirmed he was going to be in attendance. At the SuperShow the night before, I about lost my voice when his entrance video started because I didn’t expect to see him perform, nor did I expect to see him in back to back nights at RevPro UK. I only ever thought I would see him perform on the New Japan live streams. Never in a million years did I think I would ever see him live let along have a conversation with him! His personality reminds me of several of my former colleagues in Japan, especially since many of them went to school in the prefectures near his home. 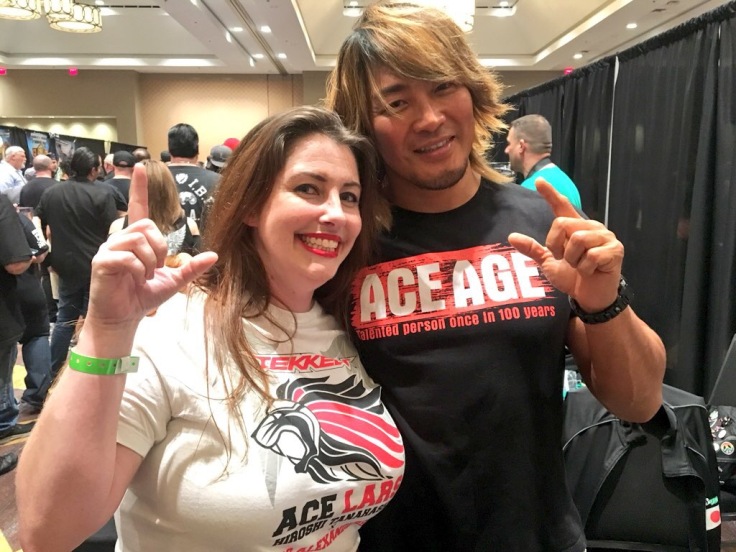 Full of Love & Energy, I can’t ever not cheer for The Ace!

He was happy to see a shirt all the way from Japan on an American girl who spoke Japanese, and my heart couldn’t be fuller as we talked about language learning. He complimented my Japanese and gave me words of encouragement. I returned the favor when he asked about English language learning. You can take the teacher out of Japan, but I guess my heart still misses it from time to time.

My next goal is to one day either catch or throw him an air guitar at a show, preferably in Japan! I also am patiently… very patiently waiting for the release of the Tanahashi x Lars TEKKEN 7 costume and music for the US PS4. In the mean time, I look forward to his IWGP Heavyweight Championship against Kazuchika Okada, who is determined to dethrone Tanahashi’s streak of successful consecutive title defeneses as Heavyweight champion in NJPW. My heart will be so divided because Okada is another one of my favorites in New Japan! What is a girl to do?!

The Time I Accidentally Joined Suzuki-gun!

Minoru Suzuki is one of the leaders of his namesake faction, Suzuki-gun, and it’s one of the five leading groups within New Japan. He’s also been feuding Tanahashi for the IWGP Intercontinental Championship, one of the most prestigious titles in the company held by others such as Tanahashi, Shinsuke Nakamura, La Sombra (now NXT’s Andrade Cien Almas), Kenny Omega, and Tetsuya Naito2. Still shaking from speaking with Tanahashi, I navigated the flow of people to Suzuki’s table.

Even though I was wearing my TEKKEN 7 x Tanahashi collaboration shirt, he didn’t give me a hard time. He was surprised that I started speaking Japanese, but at first I didn’t think I was speaking loud enough until he picked up the IC title belt from the table and started placing it on my shoulder for the photo. 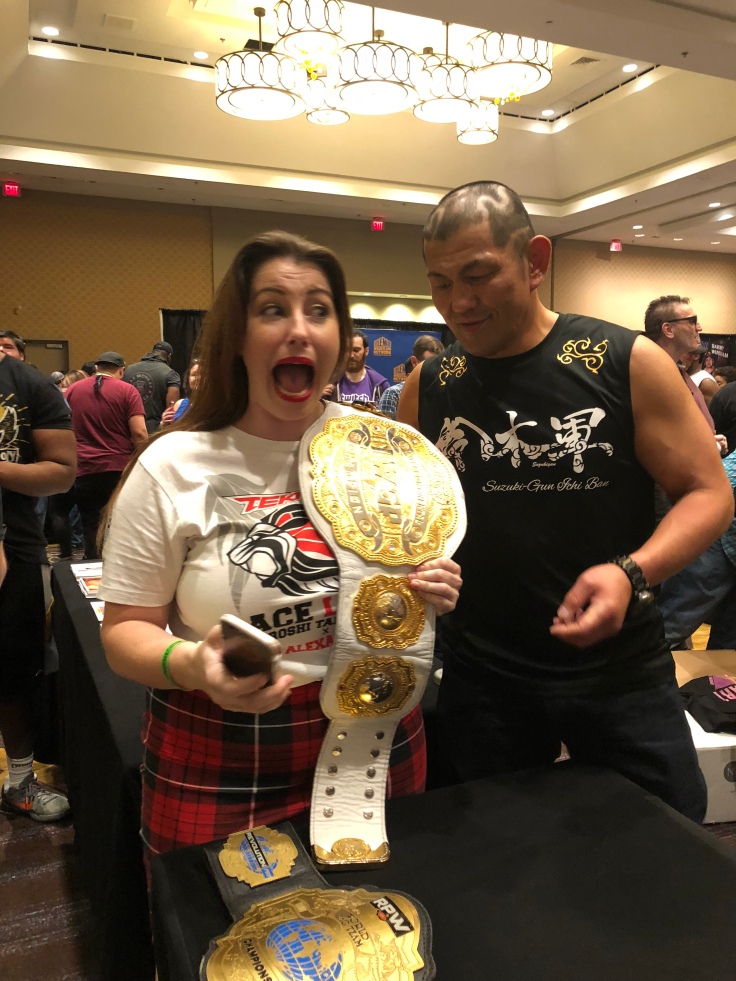 “Summarize your Mania Week in a single photo, Karen.” THIS. ALL. THIS.

Although the IC Championship got quite the facelift in recent months, it was as stunning as it was heavy! How do people walk around with these things all day long?! He could tell that I was thrilled and fighting to keep my cool at the same time, but I think he got the point that I was not prepared for such a kind gesture. Yes, he let other pose with the belt, but I thought one had to ask for permission to touch it, let alone shoulder it! 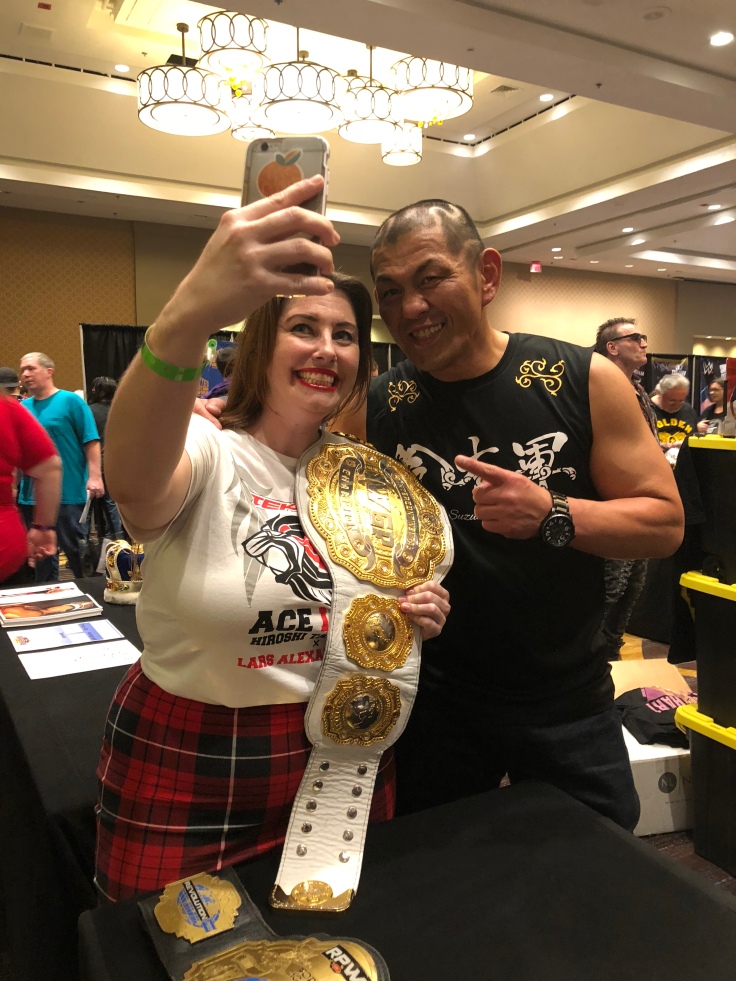 Even with lipstick on my teeth, I still gave my best Cheshire Cat grin!

Suzuki is one of those who look incredibly intimidating, but is not only personable, but exceptionally humble. It is a shame that they didn’t have all the New Japan guys tabled in the same part of the ballroom because I would have loved to have had a photo with both he and Tanahashi at the same time! The next challenger for the Intercontinential title is one I have yet to meet, but is also on the list: Testsuya Naito, leader of Los Ingorbernables de Japon.

My only regret was not making my way over to Ishii’s table, but after the chaos of the lack of queue organization, including the understanding that the convention attendees were to police the lines themselves and the air conditioning was not working well at all, I needed to get out of the exhibition floor before I fainted dead. I would have stayed at the convention longer had I not felt so uncomfortable. Also, the queue to get into the ballroom was a disaster with viturally no staff providing any sort of direction to the event attendees. Either they didn’t have enough volunteer staffers or they cut corners to maximize profits. I am grateful for the experience, but I don’t know if it would be one I would do again unless WrestleCon made massive changes to improve the customer experience. 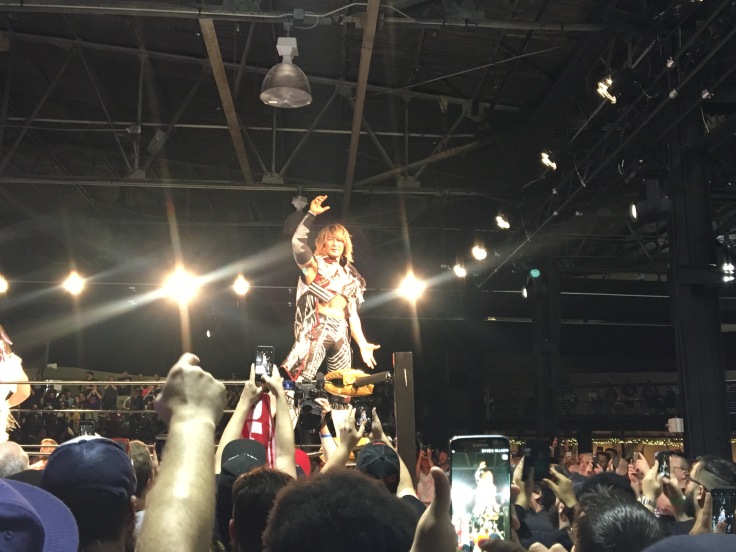 I wait for the day for Tanahashi to have his lion mane back. He’s got such great hair!

I did enjoy both the WrestleCon SuperShow and the RevPro UK show in which all four wrestlers performed. I can’t wait to see if the next New Japan show in the USA will be on the west coast again or if it’ll make it’s way to the east coast! I know that CEO Gaming has announced a collaborative event with NJPW for their three day tournament series at the end of June/beginning of July, so my mind is already swimming at the possibility of who I could potentially see next!

Also, my friends keep hinting that we should go to ALL IN Labor Day weekend in Chicago now that Okada has been confirmed as one of the participants. It would be the weekend prior to my birthday, but I don’t know if I can make that drive. We’ll see…

One thought on “OOTD: Love, Energy, & Iron Will”