Sunday, July 31st, our beloved Harry Potter celebrated another name day! As I recovered from my GeekyCon experience with my friends, I gave thought as to how I could better present my “After the Con” experiences. I was fortunate that GC weekend coincided with the birthday of the famed “Boy Who Lived,” and with the release of Harry Potter and the Cursed Child, there was plenty of residual feelings about one of my favorite series of all time. With my first Geeky behind me, I wanted to share one of the most glorious creations I have ever laid my hungry eyes upon: The Golden Snitchwich.

A perfect post-Quidditch snack that Madame Hooch would love!

Those familiar with the first book and later film in the series: Harry Potter and the Sorcerer’s Stone, remember that when Harry joins his new school and gets into some mischief, he finds himself volunteered (and possibly “volun-told by Professor McGonagal) to join Gryffindor’s Quidditch Team. Due to Harry’s position on the team, he becomes rather intimately and unintentionally acquainted with one of the game’s pieces of equipment in another case of “sheer, dumb luck.”

At GeekyCon, I was introduced to Harry and The Potters and their fabulous creation: Golden Snitchwiches, a magical snacking beast created in the image of the highly coveted prize in all of Quidditch: The Golden Snitch. My friends and I circled the convention in a dire attempt to catch one of the elusive Snitch by Snitchwich (SxSW) mobile concerts, so we could properly experience the glorious creation! Alas, our Snitchwich dreams went unanswered as we could not locate a show before we needed to head out. In our exploration of the exhibit hall, our stomachs rumbled in envy as we observed the construction of these tricky delights, trying not to drool too heavily on the band’s merch table.

Starring the creators of The Golden Snitchwiches!

Danielle and I collaborated on the shopping list as stalked the aisles of the grocery store. We elected for an impromptu girls’ night in for a few hours to GeekyCon debrief and watch videos together. We decided the perfect post-con snack would be the one we couldn’t manage to lock down: The Snitchwich. If you are familiar with summertime weather in Florida, it is also ideal for anything that could possible cool one off! Instead of the traditional Golden Snitchwich as explained by it’s creators, we made a Floridian summer approved alternative in ice cream sandwich form!

I cannot and will not claim responsibility for the spell I am about to cast, and I am completely unapologetic about it as well. “I solemnly swear I am up to no good…”

The biggest task was to make it look as much as the famed, game-winning ball with as little effort as possible. Those unfamiliar with Harry Potter, the game of Quidditch, and what a Golden Snitch is supposed to look like, I defer to the all mighty, WikiCommons for those great photo of the film incarnation of the Snitch. I didn’t think twice about buying the Palmeritas when it’s patterning was pretty spot on! 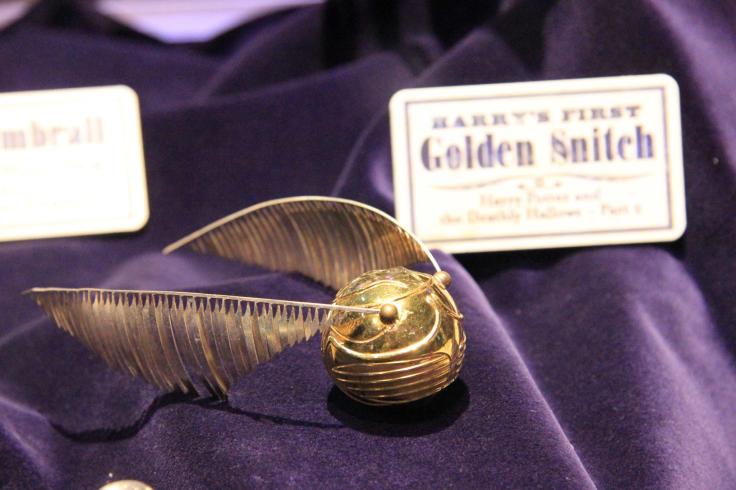 Yes, I could have lined up the seams better, but I was starving!

Depending on one’s flavor or texture preferences, you can substitute your favorite ingredients. One of the great things about teaming with Danielle is that we have similar tastes in nerdy things and in food which made planning this on the fly a cinch!  Although I’m a Ravenclaw and she’s in Slytherin, we worked together to make our version of the Golden Snitchwich a soaring success! Next time, I will try a dulce du leche ice cream for a more caramel and less peanut butter dynamic.

I could have saved some to enjoy as I read Harry Potter and the Cursed Child, but they were so fun and messy that I wanted to make sure my brand new book stayed food-free (for now)! I’m not going to lie and say that it beats the original concept because up until this point, I had never heard of a Golden Snitchwich, but I am sincerely hoping you’ll enjoy my version regardless of your House alliances. Think of it as one of the many goodwill ambassadors at The Quidditch World Cup!