When I returned from Japan, Seth Grahame-Smith released Pride and Prejudice and Zombies which I promptly gave the skeptical side eye to while browsing the new releases section of my favorite book seller. I couldn’t bring myself to actually pick up PPZ. I thought the idea was absolutely ludicrous that anyone would dare touch Jane Austen’s iconic work, Pride and Prejudice, let alone do something as crazy as add zombies of all things to it. The zombie survival theme evolved into an international sensation in the last few years, and with my adoration for The Walking Dead, I could no longer fight my curiosity once the trailer for PPZ was released.

“I shall never relinquish my sword for a ring. The right man would never ask me to.” ~EB

Q1: How did you celebrate the release of Pride + Prejudice + Zombies?

In preparation for my PPZ cinematic experience, I started my morning with a refresher viewing of Pride and Prejudice (2005; Knightly/MacFadden). It occurred to me that I did not own any version of P&P on DVD, so I relied on Netflix for technical support. I should turn in my Austen Fan Club Membership for not having a copy of the mini-series which made Mr. Darcy (and Colin Firth) an American Household name1. Having refreshed my Austen brain, I headed out for a little me time at the salon and grabbed lunch.

I met my gal pal, W, at the theatre, and after several arduous hours of zombie slaying in the English countryside, we headed over to my favorite geeky restaurant in all of Orlando: The Cloak & Blaster for an early Galentine’s Day celebration2. (Sound familiar? I went there for another Girls Nerding Out with Danielle for St. Paddy’s Day, too!)

I could not help but select The Zombie Killer as my pre-dinner beverage. It was a grand combination of crisp apple cider with tart cherry and a subtle honey finish. Even in low light, the blushing rose color looks delightful in a pilsner glass. Unbeknownst to me, the best pairing for this cider is rich, fatty foods, so it went gloriously with my U.S.S. Cheddarprise grilled cheese sandwich. It apparently pairs well with all my vices: burgers, cheese, avocados, cupcakes, and ice cream. Next trip to the liquor store, I may need to locate a bottle to take home.

In PPZ, my adoration for Elizabeth & Darcy grew immensely, so when I found their Funko Pops at a GameStop, I couldn’t leave them behind. Once the Literary Lounge is completed, they will have a prominent vantage point to ensure the undead hordes are kept at bay. I’m trying to decide if I need Jane Bennett and Lady Catherine de Bourgh. My respect and love for Lena Headey is really pushing me to get both Lady Catherine and Cersei Lannister (from Game of Thrones).

Actually, I haven’t. What hooked my interest in PPZ was the author follow up novel,  Abraham Lincoln: Vampire Hunter. I read it cover to cover in a Barnes and Noble in White Plains, NY. It was a refreshing break from the Twilight Saga mania that was around during that time. When it’s ALVH hit theaters, I reveled in the unique twist on history. It reminded me of Anne Rice’s Interview with The Vampire, darker and far less sparkly.

Having seen the films, I would like to add both PPZ & ALVH to my collection. I’m really digging the PPZ: Deluxe Heirloom Edition Hardcover Edition and the library binding of Abraham Lincoln: Vampire Hunter.

Q3: Which fighting style in PPZ do would you have trained in?

While training in the Japanese martial arts was designated as a benefit of the upper class, I definitely see myself wielding Japanese weapons such as a katana/wakizashi combination and naginata (halberd). I’m not much of a hand to hand combatant, so the Chinese martial arts training of the Bennett Sisters would do me very little.

The Bennett Sisters demonstrate Squad GoalZ in an apocalypse!

Q4: Which of the versions of the books and films are essential in your opinion?

Austen has be done and redone multiple times, but if I had to short list which interpretations of the films, I would go with my favorites 1995, 2004, & 2005, before diving headlong into Pride and Prejudice and Zombies.

Q5: What are the tie-ins should be part of your PPZ Party Arsenal?

In addition to your preferred combination of books and cinematic interpretations, there are a couple of P&P inspired items I really desire for my Nerding Out purposes. While I have not experienced the Pride and Prejudice Movie Cookbook by Anne Derry, I did play Marrying Mister Darcy with the Undead Expansion at a wedding back in November. Despite it being my first time playing, my friends and I had a blast over adult beverages and additional levels in cunning! It would be my number one choice for a Girls Nerding In: Stone Cold Jane Austen edition with PPZ! 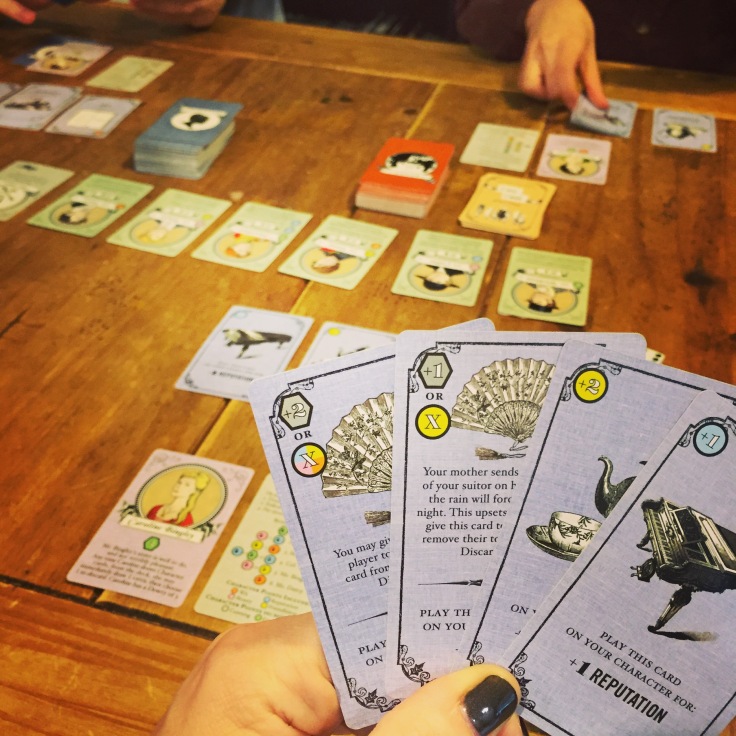 I was Caroline Bingley and I completely lost, but it was glorious!

PPZ is coming out on DVD at the end of May, but my biggest conundrum is deciding if I should get the regular DVD, or invest in a Blu-Ray player for the high definition edition. I would love to plan an afternoon tea party with PPZ, yummy treats, and some Marrying Mister Darcy. What do you suggest?