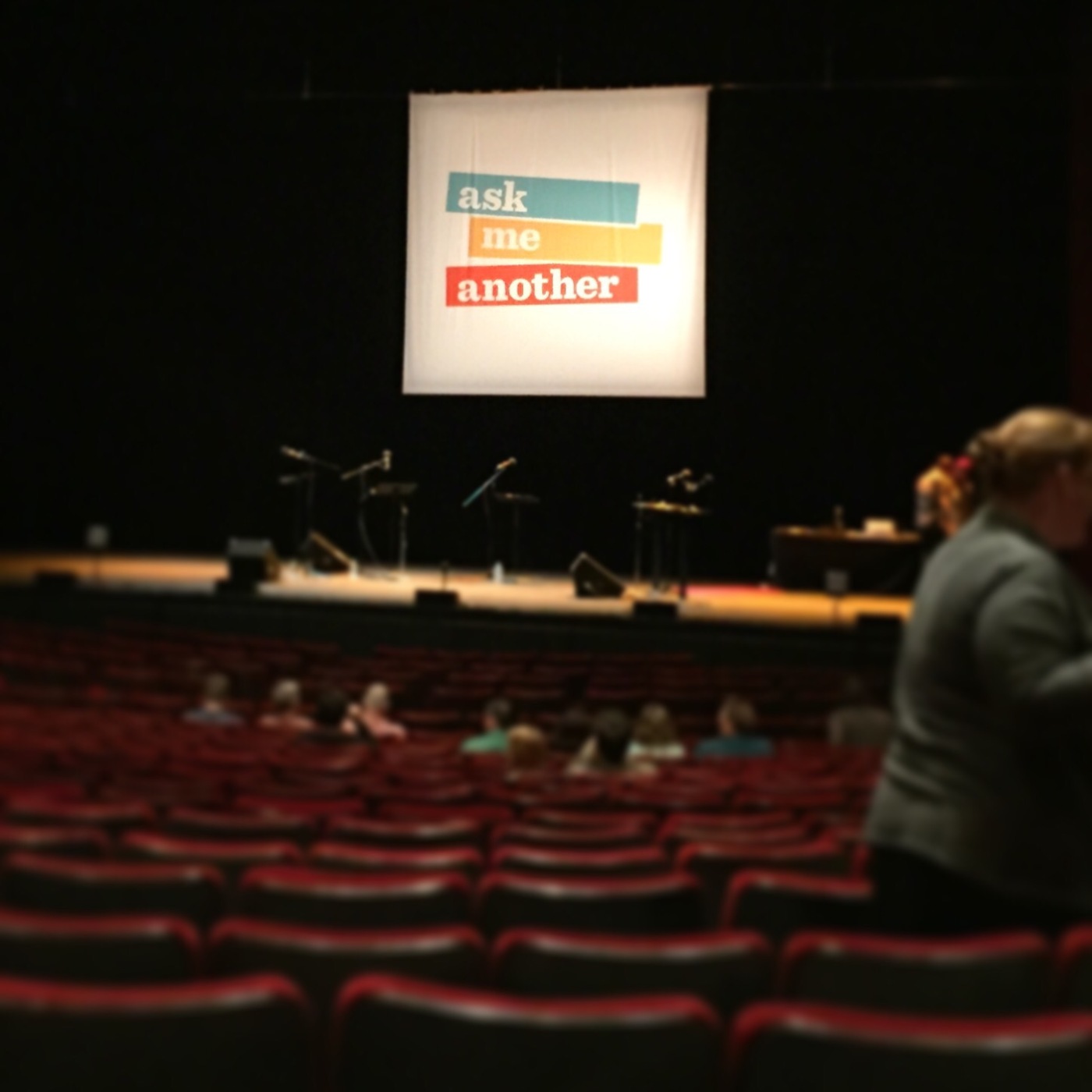 Before you prepare your pitchforks and torches, please understand that I tend to live under a rock. I am so incredibly late to the NPR bandwagon, that I feel like I am running a marathon to catch up. When my Gainesville gal pal, Christy, asked if I would join her for a live taping of NPR’s Ask Me Another, I had no clue as to what she was talking about. When she explained that it was an insanely popular and challenging quiz show, the trivia nerd part of my brain had a minor meltdown. How did I NOT know about AMA?! Even on a weekday, we were able to have a wonderful evening of Girls Nerding Out, and you’ll be floored to know that I kept myself in a full social media blackout, so I could properly immerse myself as a first timer. 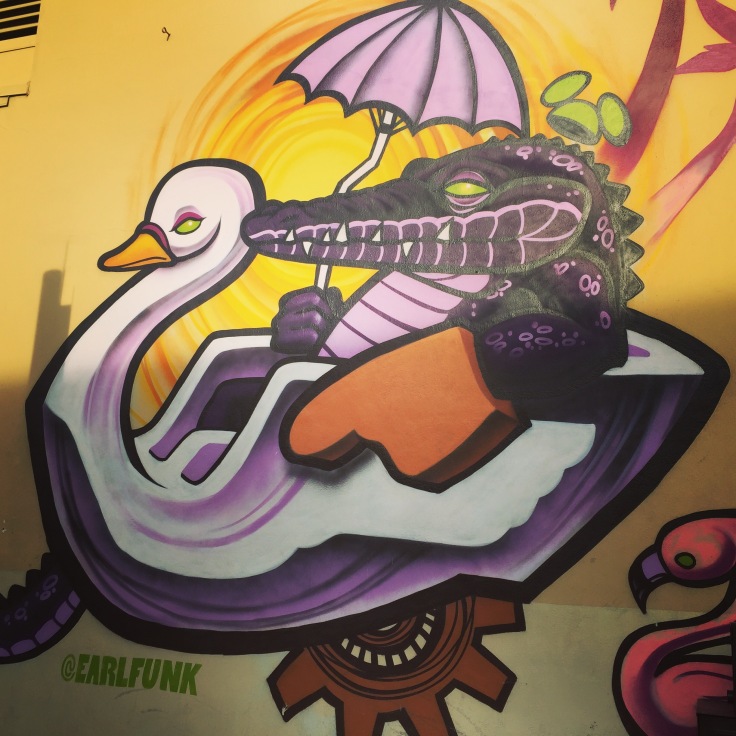 Downtown Dinner with The Wahlburgers

Christy and I planned to beat the weekday rush hour traffic around downtown by arriving early, parking, and heading into downtown for dinner. With its close proximity to the historic Bob Carr Theatre, I suggested Walhburgers for our dining pleasure. I’ll own up to the nerdy roots, but not because of the reality show. I grew up loving Donnie and the New Kids on the Block and following Mark’s evolution from Marky in Calvins to international film star. Although opened back in February, I wanted to wait for the right occasion to enjoy my first visit. After this wonderful visit, I am planning on bingeing on the TV show and making some burgers at home. 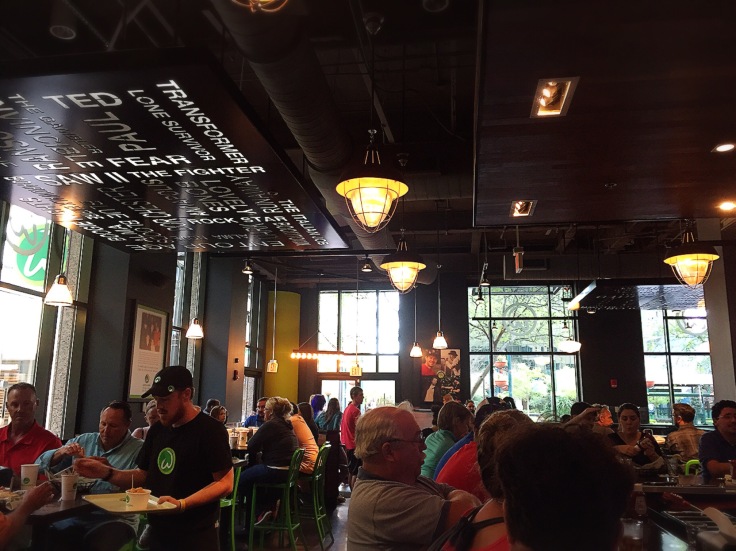 A full house on a Wednesday evening, so we sat at the bar!

Even on a Wednesday, the dining room was packed, and while getting the food to go was also an option, I suggested sitting at the bar. We were able to sit and get served quickly. The bartenders were really sweet and worked quickly. Had I done my homework, I would have requested a pint of Walhbrewski Pale Ale crafted by Boston’s Harpoon Brewery, but I did enjoy my Kona Brewing Big Wave Golden Ale. 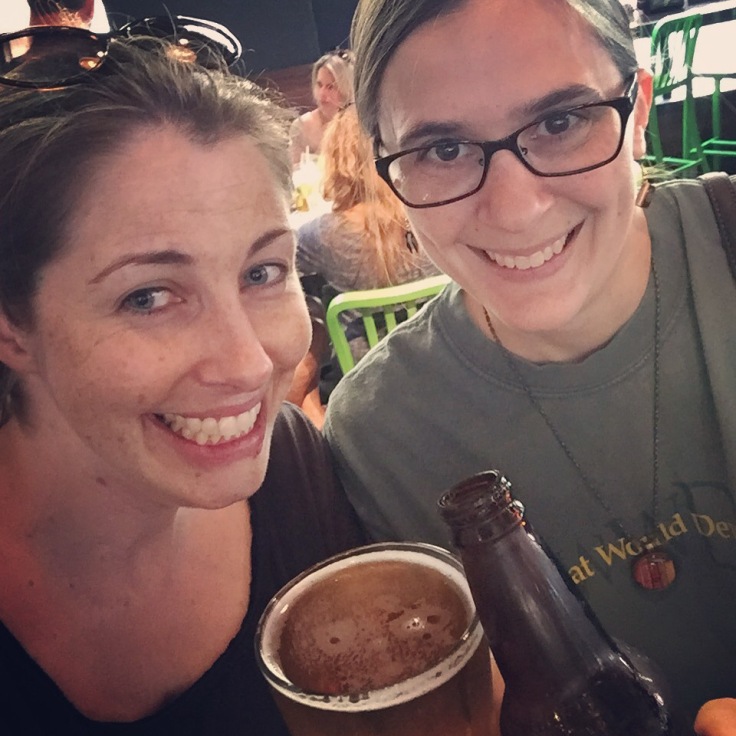 Our meals arrived quickly, and I enjoyed my Our Burger. It was cooked properly to medium and the combination of sauces made it wonderfully sloppy. In my experience, wearing a little bit of your meal can be seen as a celebration of its flavor, and I am sure I had sauce everywhere. I ordered the side of Alma’s Macaroni Salad… and I got a DINNER PLATE of macaroni salad (and was told that it was “a half portion!”) It was fantastic, but half of my generous “half portion” accompanied me to the theater. The sides are hefty and worth the price, so be prepared to bring home a little take out. Next time, I am packing my own storage containers. 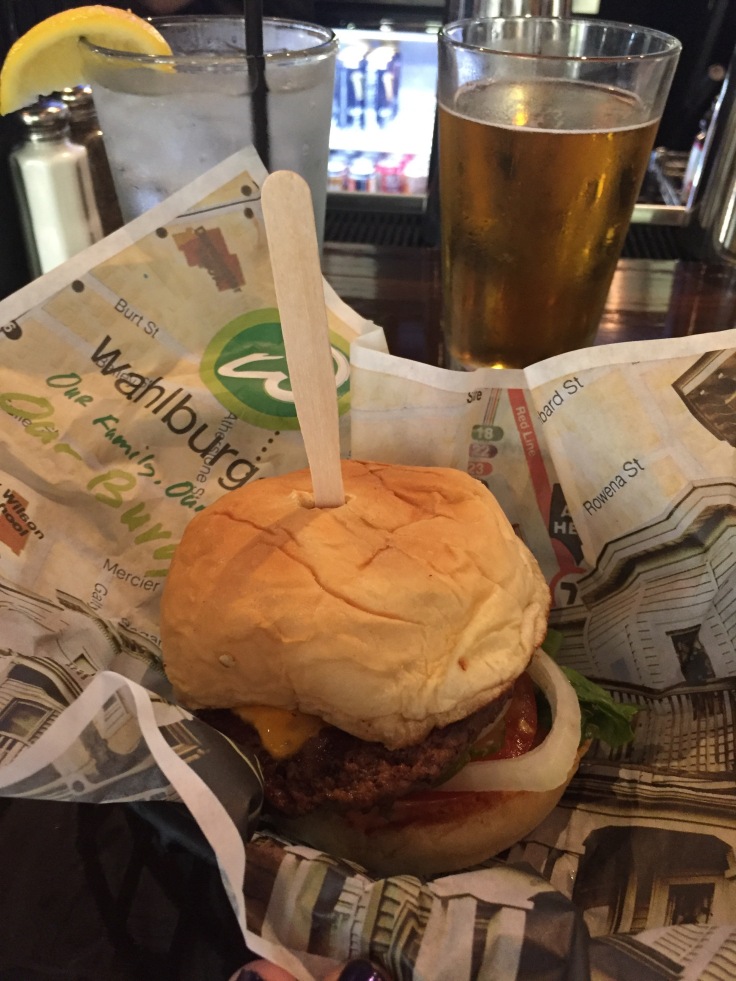 Our Burger (5oz) is Paul’s Choice. It’s modest portion size makes it mine!

The other family favorites from The Menu:

At least now I have motivation to go back and have a proper Wahlburger experience, as I would love to split a O.F.D. (Originally From Dorchester) Burger and a Wahlbrewski. Oh, and I’ve got that Grilled Banana Fluffanutta and it’s Adult Frappe version in my crosshairs. Care to join me next time?

Girls Nerding Out with NPR

This was my first visit to the Bob Carr Theater, and no sooner did we enter, I fell in love with the architecture. I would love to research the basic history of this theatre because the brick facade looks like a stage set encased in glass. Next time, I am bringing some water because the gorgeous windows which enclose the atrium felt like a greenhouse. There were cooling beverages available at the concessions, but with my packed Wahlbelly I only had room for some good ole H2O. Historic elements of the theater were meticulously preserved, and I don’t know about the Mens’ Room, but the Ladies’ had lots of really neat old photographs on the walls. 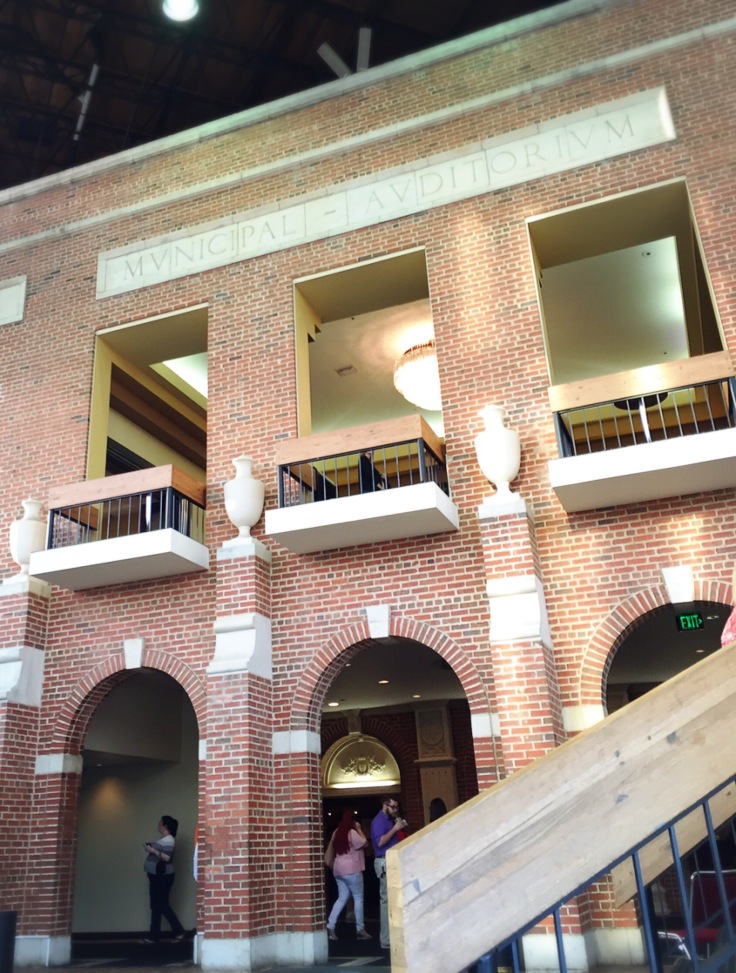 Stepping through into another world for a few hours.

The wonderful thing about stage shows is there typically isn’t a bad seat in the house, unless you’re petite and you get sat behind the tallest person in the entire theatre. Typically, that’s much luck, but tonight, we had a clear view of the stage from our seats. 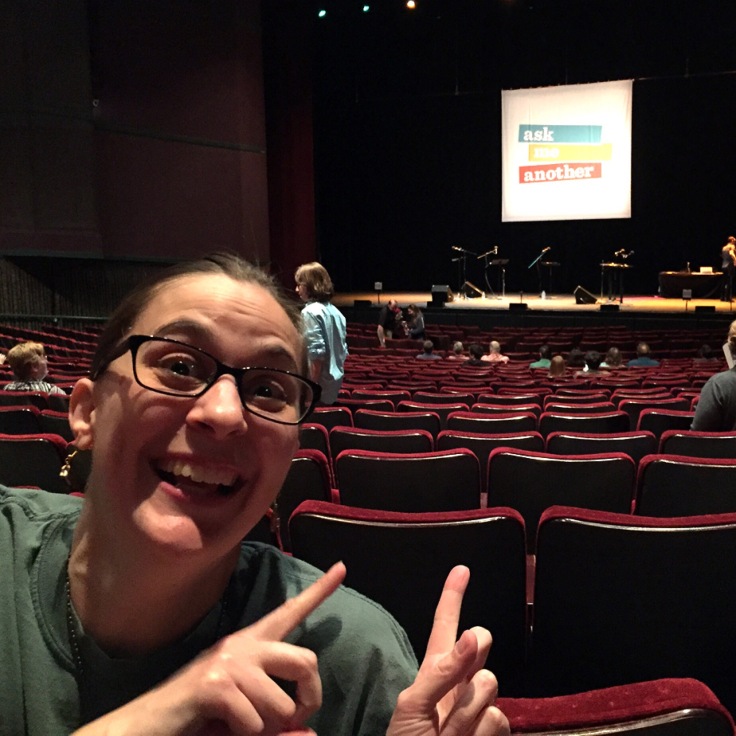 With the show being taped in The City Beautiful, there was a theme to all the contestants selected and to the quiz challenges presented. Christy auditioned, but unfortunately wasn’t selected. The Grand Prize Winner won some pretty sweet swag, and while I would love to gather my courage and audition, I worry that I would have flashbacks to miss spelling “February” in the fifth grade spelling bee.

I cannot wait for the episode to air sometime in May because I want to talk about ALL the segments! The panel included host, Ophira Eisenberg, “the One-Man House Band” Jonathan Coulton, and Puzzle Guru/Editor, Art Chung. The VIP (Very Important Puzzler) Guest was Mike Rowe who has one dreamy voice, and is one outstanding storyteller. I’m looking forward to checked out his Podcast!! 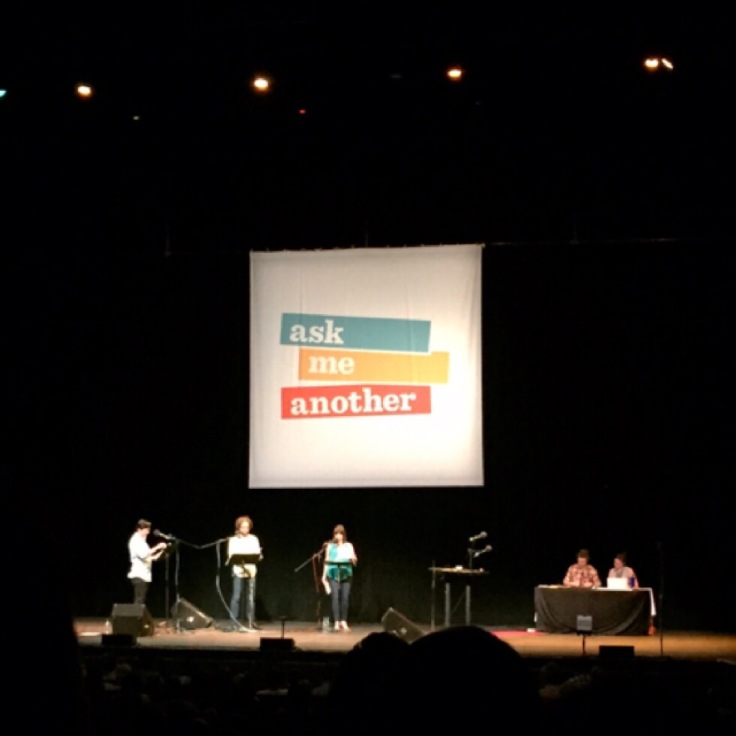 After the show, the re-record some of the sound flubs! #BehindTheCurtain

Can I tell you how hard it was to keep my mouth shut during this awesome show? I wanted to answer everything, especially on a particular question during the Audio question portion part of the show. Should you listen to the show, you’ll hear that I was not the only one in the audience about to go bananas. Like Gwen Stefani-Hollaback Girl- B-A-N- A-N-A-S (THIS IS BANANAS!)!

I really want an AMA Rubik’s Cube, but I doubt that I would ever play with it and shift the colors. I am terrible at them, but it would be an awesome conversation piece for the Literary Lounge. After the show, the cast came out for a photo meet and greet. Had it not been a weekday evening, we might have stayed. Next time, I’m definitely queueing up!

Ask Me, These Questions Three 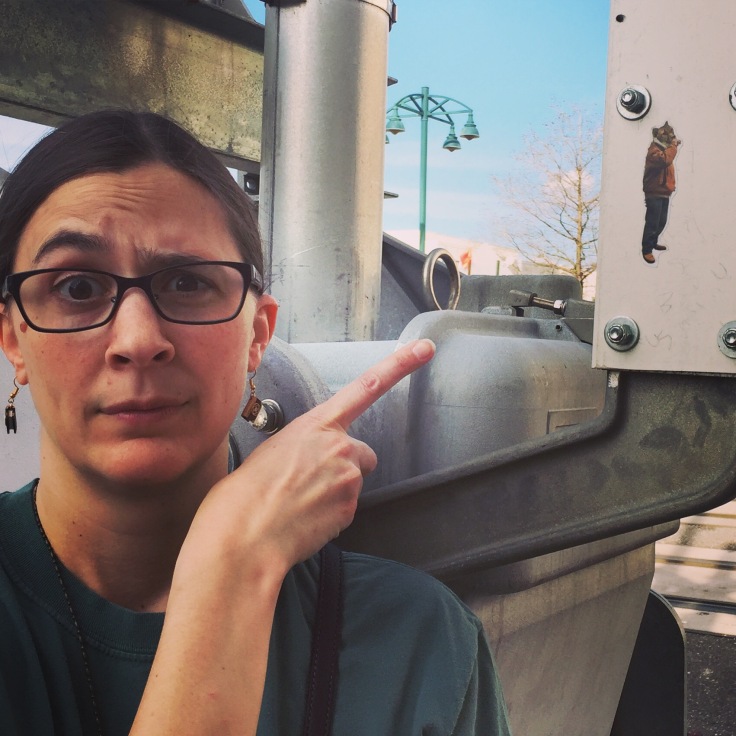 Waiting for the SunRail to pass, Christy found one hell of a Cool Cat.