A month ago, I discussed curating the perfectly nerdy gallery for my living room. Of the proposed posters I desired, the limited edition Voltron: Our Key to Victory poster designed by Dave Peril, won by a landslide as the one I should invest in. I was fortunate enough to receive print number 50/150. Voltron: Legendary Defender will be released on Netflix starting June 10 and is being produced by DreamWorks! 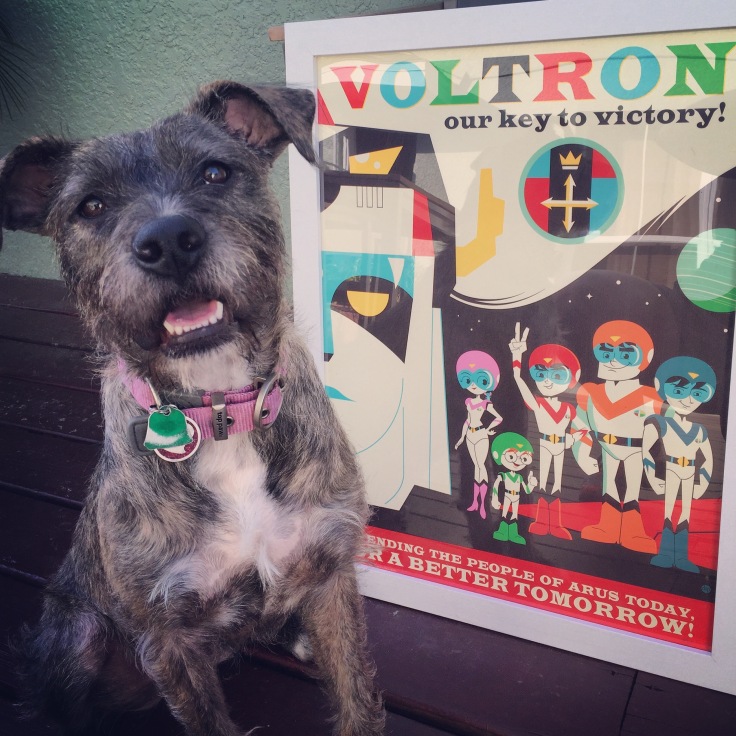 Zelda shares in my excitement about the latest selection!

I’d be lying if I wasn’t excited about the casting (especially Keith) for this reboot of one of the most iconic 80s animated features from Japan to take the US by storm. For those desiring more information, including a peek at the teaser trailer and behind the scenes photos with the voice actors, check out this great write up by B. Alan Orange over at Movie Web. I know I should be outraged with the revival, but I legitimately want to give it a chance.

If I had to pick a lion, I always had a soft spot for the Blue Lion. In the original series, it’s pilot, Sven, was always my favorite, and I think it’s because they gave him a Swedish accent which spoke to my heritage. No, I did not like it because Princess Allura took over later. I always loved Pidge’s green jump suit best, and I think that was due to it actually matching his lion.

The runners up were Sailor V for Vendetta and Twilight Gal, but the hardest decision is picking the next one to order in June. Thoughts?