Have you watched enough Hunger Games, Maze Runner, Battle Royale or Labyrinth and think to yourself, “I could totally beat that?!” In an epic demonstration of speed, wit, and teamwork, I actually considered starting running in 2004 after watching the very first episode of  「逃走中」（TouSou Chuu; “Run For Money”). Without the physical peril of dystopian drama films, the premise is simple: Run. Out run The Hunters. Run away. Run out the clock. Be ready to go in three… two… one… 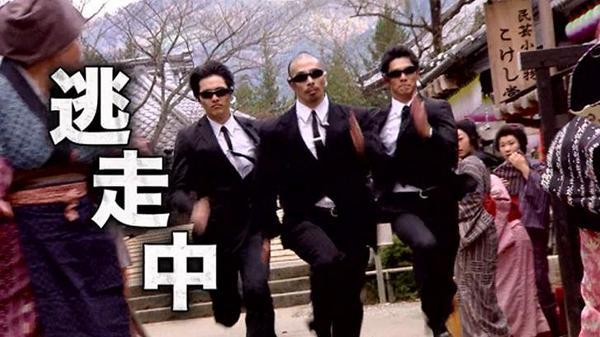 “Run For Money” inspired me to even consider running as a sport.

Aired on Fuji TV (one of my favorite Japanese stations),  TouSou Chuu is a “beat the clock contest in which contestants are given tasks. The elements of TSC are the Toushousha (“Runners”), the Hunters, the Missions, and Chronos (Game Control). One of my favorite things about Japanese variety television programming is that the participants are musicians, pop idols, models, TV talents, and comedians, which in turn makes them feel more accessible to their fan bases. From the start of the clock, the prize money available to win starts increasing, however, the only way to cash in is to survive until the clock runs out without being caught. It’s a giant game of tag with bragging rights and money at stake. I know that would motivate me to do my sprint work and potentially learn some parkour. 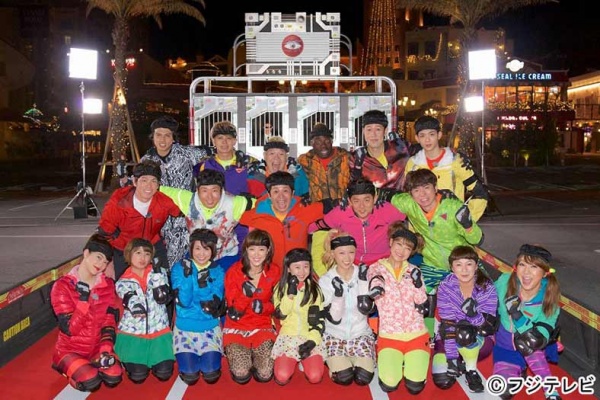 Each episode has different number of participants, locations, and missions!

As an homage to The Matrix, Terminator, and Men in Black, Chronos provides their own “android hunters” in black suits and sunglasses to chase the participants throughout the map. Additional challenges are added via missions, area section closings, exits getting locked, and the inevitable addition of more hunters, especially in the final minutes of the game! Of course, the men selected for this role are runners who are accomplished sprinters and marathon runners, and although they slowly roam the map area, once they lock on a target, they break out into a sprint and continue chasing their target until caught. One doesn’t necessarily need to be the fastest runner, just the most efficient and keen to outlast the time limit. 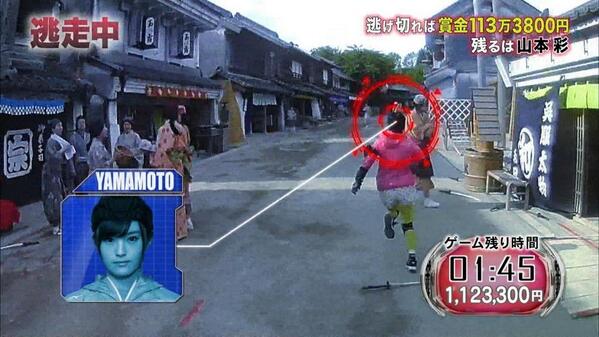 High suspense as the clock winds down, the money keeps going up!

In lieu of the Maze or the Arena, the settings selected are famous sightseeing spots throughout Japan, from Hokkaido to Okinawa. Previous locations included Hokkaido Historical Village, Fuji Television Studios/Odaiba (Tokyo),  Meiji Village Museum (Aichi), Huis Ten Bosch (Nagasaki) and Mihama Town Resort American Village (Okinawa). While some venues do have the occasional pedestrian traffic, most of them are treated like closed sets for the safety of participants and crew. In earlier episodes, runners and hunters all have their own on the move camera team, but in later episodes there is the addition of body cameras which provide a video game effect, providing the editing crew to switch from third person perspective, to first person. Runners also wear protective gear in the event of a trip or fall. 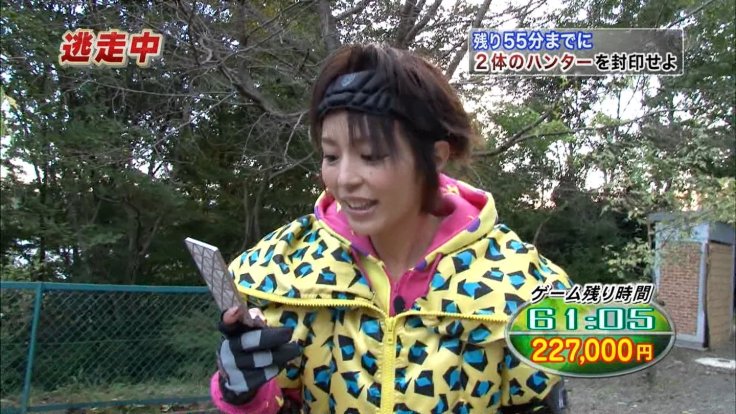 A new message! Is it MISSION TIME? Did someone get CAUGHT?

All communications from Chronos are sent via e-mail to the telephones issued to the contestants with all the other participants numbers. Participants can also use the phones to contact one another for meet ups, missions, or other tasks outlined by the game rules for that particular round. When a player is captured by the Hunters or otherwise eliminated, a Kakuhou (“Caputured”) announcement  is sent to all players. Eliminated players are sent to a jail cell where they get to wait out the rest of the game. Updates are provided by the crew and mobile phones, but they do not get to watch in real time. 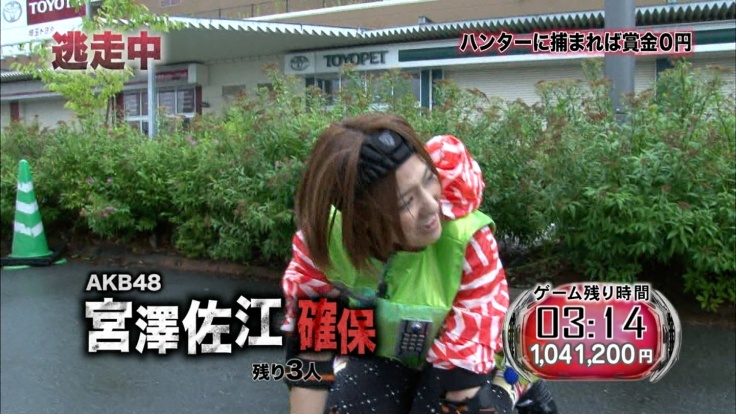 GAME OVER: With 3 minutes 14 seconds left, luck ran out for ABK48’s Sae Miyazawa.

Contestants are provided with the option of dropping out via Jisshuyou Denwa (Drop Out Phone), in  which if they can find the designated telephone, they can call and request to be removed from game play. The upswing is that they are able to keep the amount they amassed to that point in game play. However, they are prevented from winning the grand prize. One of the best parts of this franchise is that there is the potential for multiple payouts as well as the possibility of absolutely no winner. Should all contestants be caught prior to the clock zeroing out it’s GAME OVER. There are no fancy prizes or luxury vacations. Just cold hard cash. 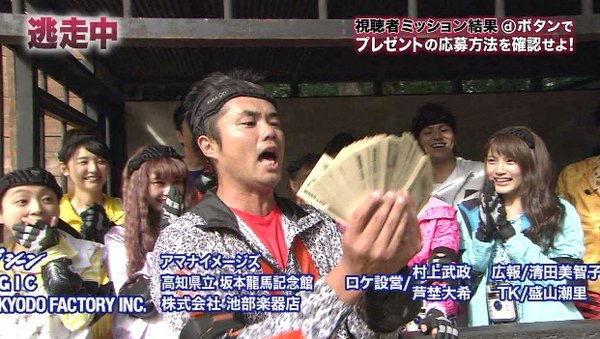 About to make it rain with all brand new bills!

The growing popularity has resulted in a film, video games, and board game as well as spin-off series called Sentou Chuu (“Battle for Money”) which looks like dodgeball meets period drama with ninjas and princesses which need safe passage. While the episodes have been released on DVD, they are only available in Japan. For the full Run For Money experience, you can find videos on YouTube complete with the suspenseful narration, ominous music, and heart pounding action. More recent events include a scripted narrative that runs parallel to the action and which can be incorporated into the game as side quests. An American version, Cha$e was released in 2008, but only lasted six episodes, proving that not everything can be easily duplicated in different markers. 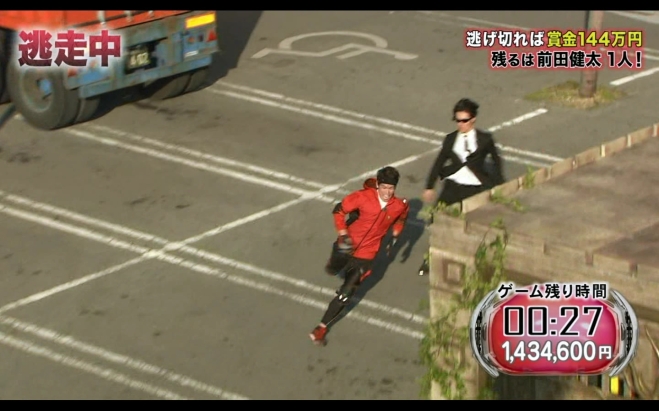 Watching clips programs like this make me truly miss the unique beast that is Japanese variety television. Game shows like blur the line between fantasy and reality, but in a way where it makes games from our childhood seem far more cooler. If I were to resume running, I would love to have goal such as winning “Run For Money” instead of spending a heap of money on race fees for more medals to hang and t-shirts I don’t always wear.  The popularity of niche races like zombie runs, obstacle courses and mud races are fun, but what appeals greatly to me is the mental element Tou Sou Chuu brings to complement the endurance portion of the show.