A gal pal of mine hosted a holiday party last night, and it was with a heavy heart that I was unable to attend. For those who know me, I am the worst at keeping secrets, so when it comes to gift exchanges and surprises, it kills me. It literally eats me up from the inside because I want to share all of my ideas. When I bolt of inspiration struck me, trying to keep my mouth shut was the hardest possible thing. For a special group of ladies, I made what I now call my Sisterhood Bouquet, and here’s how I accomplished it.

An eternal bouquet for some special Gal Pals

For all my time living in Japan, I never really mastered origami. Despite by students’ best efforts, my illustrious paper cranes always looked like sad, disheveled ducks. I love Japan, but for the life of me, I never managed to adequately walk away with any semblance of proficiency in traditional arts. I dabbled with sado (tea ceremony), immersed myself in kimono, and failed spectacularly at ikebana (flower arrangement). Honestly, I don’t know what possessed me to attempt origami for the first time in years.  Wandering aimlessly through the craft aisles, it hit me like a bullet train, so I decided to take it on full steam. With the holidays close by, the paper crafting aisle was picked through and sadly there was not nearly enough time to order origami paper. After digging through the stacks of paper packs, the “Latest & Greatest” pattern pack by Authentique Paper jumped out at me. 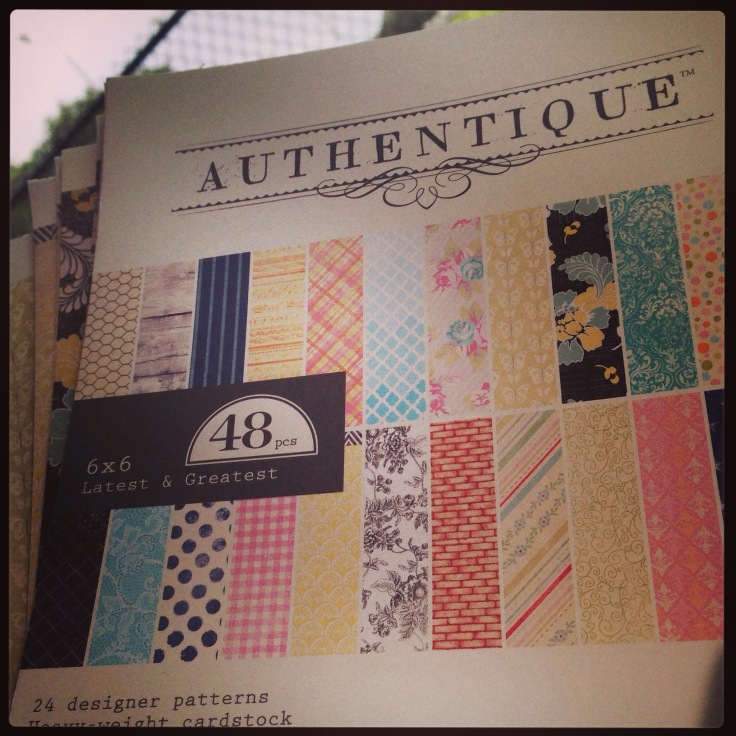 The unique mixture of designs reminded me of a modern patchwork quilt. As sewing circles were historically integral to the social interaction of women, there was an intrinsic desire to create a unique quilt of my own. Our schedules do not permit all of us to regularly assemble, so I wanted to design and create something that can serve as a reminder when we are apart.

Assembly
A great, fool-proof Kusudama Flowers tutorial is available at Origami Instructions.  Traditional origami paper has many incarnations, but the fancier, patterned styles tend to be single-sided. This is where the scrap book paper provides greater flexibility in color and pattern combinations. Conversely, a challenge arises with the heft and weight of the paper and the assembly process. To save time from pressing each petal together while the glue dries, pinch them together for 20 seconds, and then use a bobby pin to do the rest of the work. The pressure from the hair pin holds the edges together without unnecessarily crimping the paper. While stick glue can be used in joining the individual petal seams together, it is not durable and study enough to hold together the completed blossoms.  I needed to bring in the big guns, or in my case, The Glue Gun. (Insert spaghetti western intro with the dusty tumble weed here.) 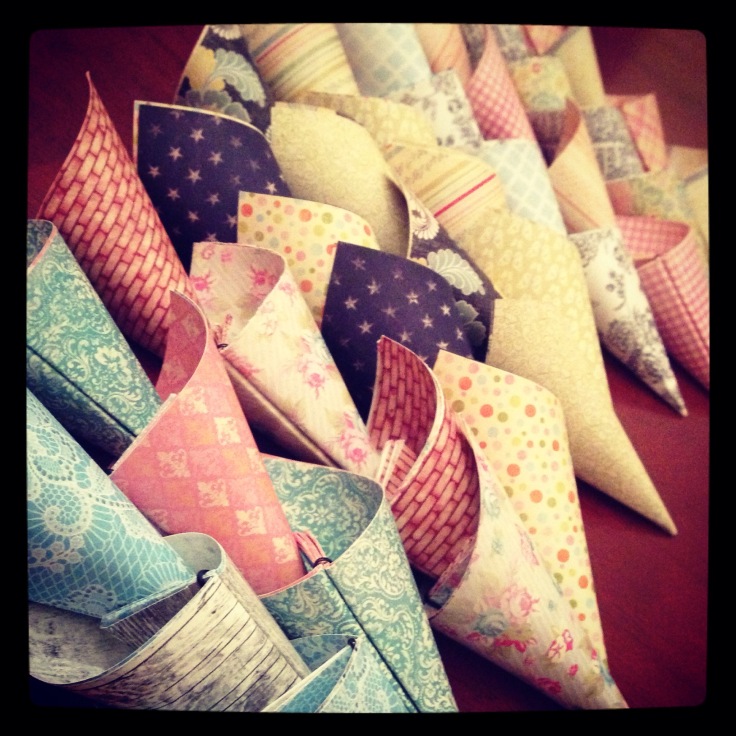 Hair pins help hold the pieces together while glue sets.

With the five-point flower, the petals have a little wiggle room, but with the four-point, the seams need to lie as flat as possible. Using the hot glue can be tricky, but thankfully, with the creases inside each of petal, they help absorb the heat from the glue while binding them together. Pairing the petals helps with the final assembly. First, make a small bead of glue along the center seam and just to the side. Touch the seams to one another, before rolling them into the glue, making the seams side-by-side (think spine of a book with the cover ripped off). Be mindful of how much glue is applied, especially at the base because it may prevent the halves laying flush against one another.

If you intend on having a stem, sturdy floral wire is the best choice for lighter flowers or bouquets twisted into a ball. For vases or other standing arrangements, thin wooden dowels would serve to better support the heft of the larger flowers. These are best glued into the center prior to the joint of the halves. Depending on the girth of the stem, the petals may need to be individually glued around it. Select ones that are sturdy, but slender as the flowers must maintain a semblance of elegance and daintiness. 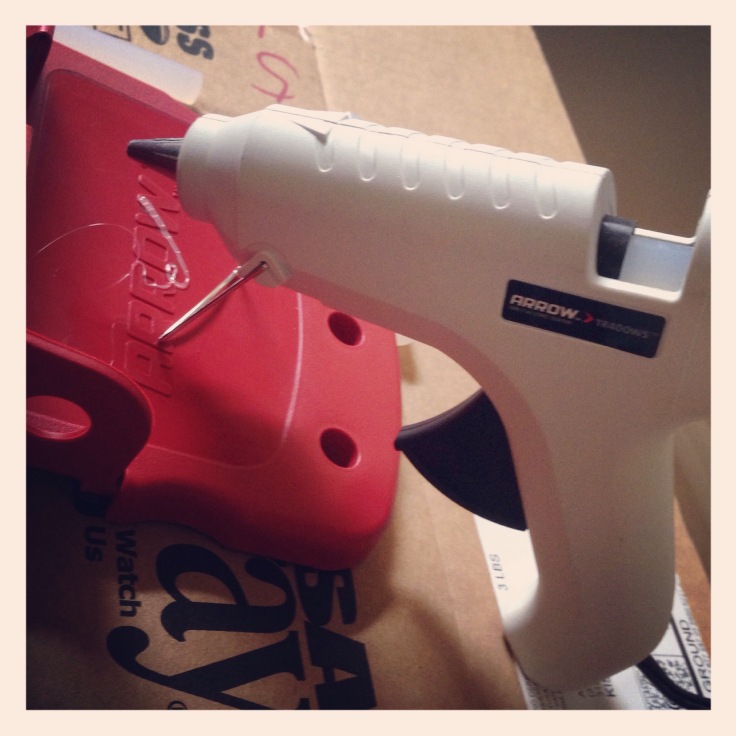 Style Points
With smaller flowers, notions aren’t particularly necessary, but with these larger blossoms, they looked unfinished. Overusing the glue gun, the flower centers had a bit of extraneous glue which demanded coverage of some sort. Most of the accents I saw were buttons, faux gemstones and beads, none of which I had readily accessible at my house. Without a secret stash of trinkets lying around a craft lair, I went to the one bag guaranteed to have something that would be the perfect fit: my flight kit. I did an old school, elementary school bully, cafeteria shakedown of my international currency pouches. I came away with currencies that included Canadian Cents, Euros, Chilean Pesos, Swiss Francs, and British Pounds. I finally found a use for all those tiny, rogue coins which never seem to get used on my layovers. Again, my job wriggles its way into my creativity, but in this instance, my friends were able to have a keepsake which is also well traveled. 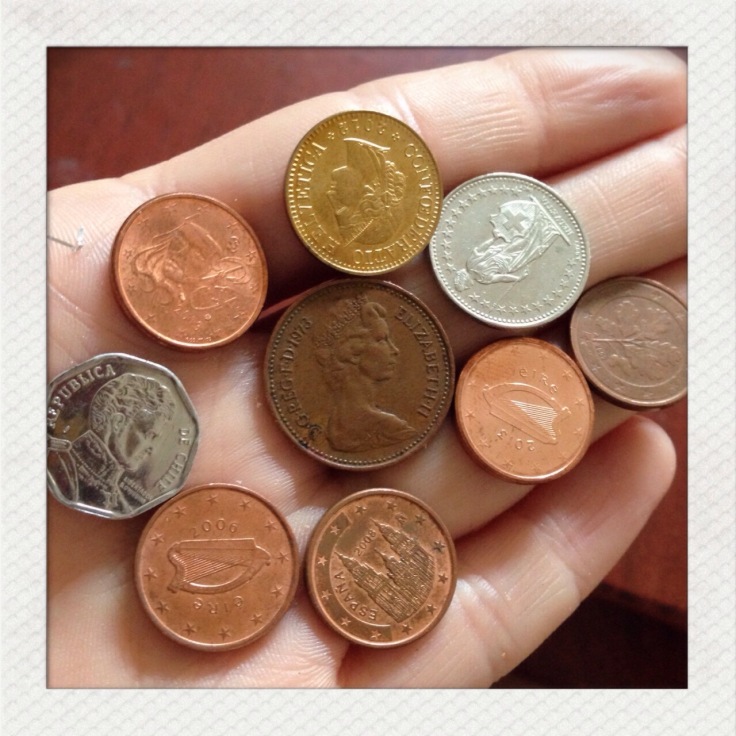 Spare change from my travels!

Folding and creasing the card stock was tricky, but using the handle of my scissors, I was able to get sharp creases without damaging the paper. Unlike origami paper, trying to refold for perfectly even edges is a bit frustrating, so I liked the occasional imperfect edge or crinkled corner. The nice thing about hand crafting items is the tactile sense of accomplishment. Though they are far from perfect, I am proud of them because they come with a sense of accomplishment. I hope my origami skills will become refined as I continue exploring and experimenting with them.

Sentiment
The intended recipients of the origami flowers were a group of girl friends who I’ve befriended in the last year. Saying these ladies were integral in my adoration for the City of Orlando would be an understatement. They truly helped me come out of my shell, and now I, too, am a proud Orlandoan. I have explored more of Our City Beautiful since our meeting than I have in the last three years cumulatively. They have helped to make Orlando my home, not just a place I go for better shopping and seeing my friends. The key to the Sisterhood Bouquet was a rather personal letter which I included with the flowers. The letter was intentionally sentimental and unabashedly vulnerable. The essential element of the flowers was the linking of them to one another by the one mismatched petal per blossom. 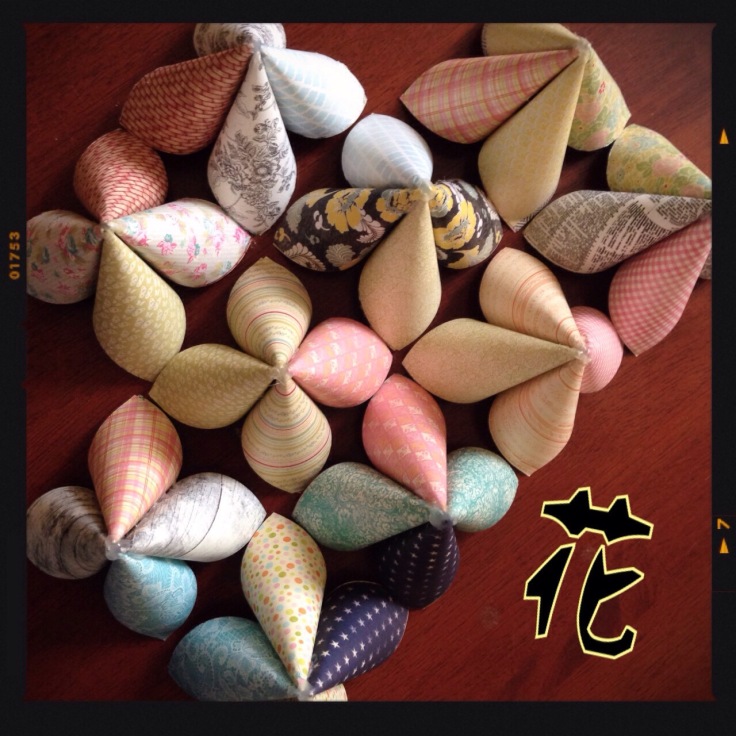 Every flower is unique, but may stem from the same root.

While each flower had the potential of being four identical petals, I felt that it would have short changed the double-sided paper and wouldn’t have emphasized my theme of solidarity and singularity. I intentionally folded the petals, so both patterns would be represented because I felt it further highlighted our individual complexity. The key was swapping out a single petal from each flower, and adding it to a different one! With ten flowers, I simply picked slid the bottom row of each column and moved it over, forming a loop. No two of the flowers share the same petal combination, but should one stop to smell the flowers, they would notice the subtle transition linking them together in a circle.

We do not get the opportunity to round up the girls together very often, but we use social media to interact with one another daily. The interesting thing about finding the right circle of friends to surround oneself with is when the usual suspects are rounded up, it does not feel like much time has passed. I look forward to making more in the future! 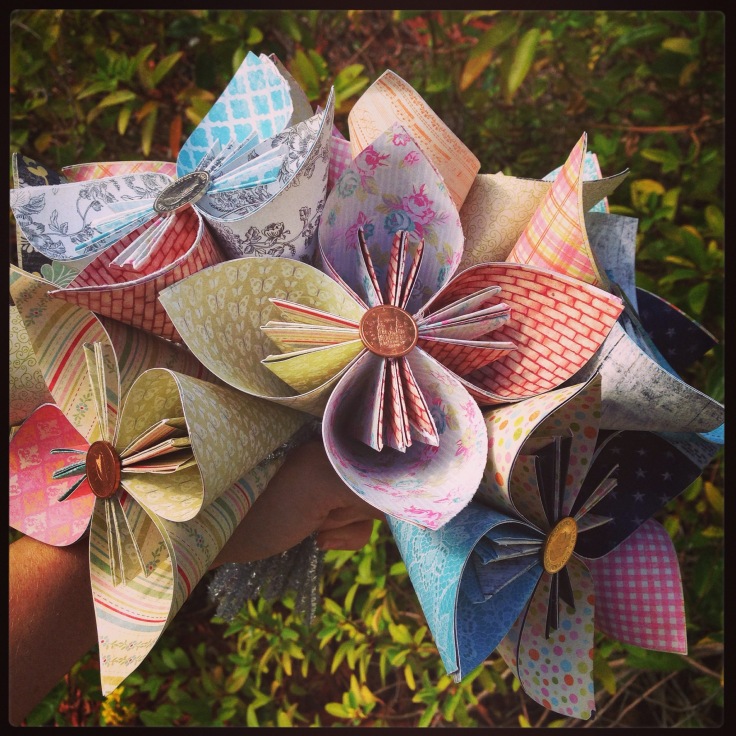 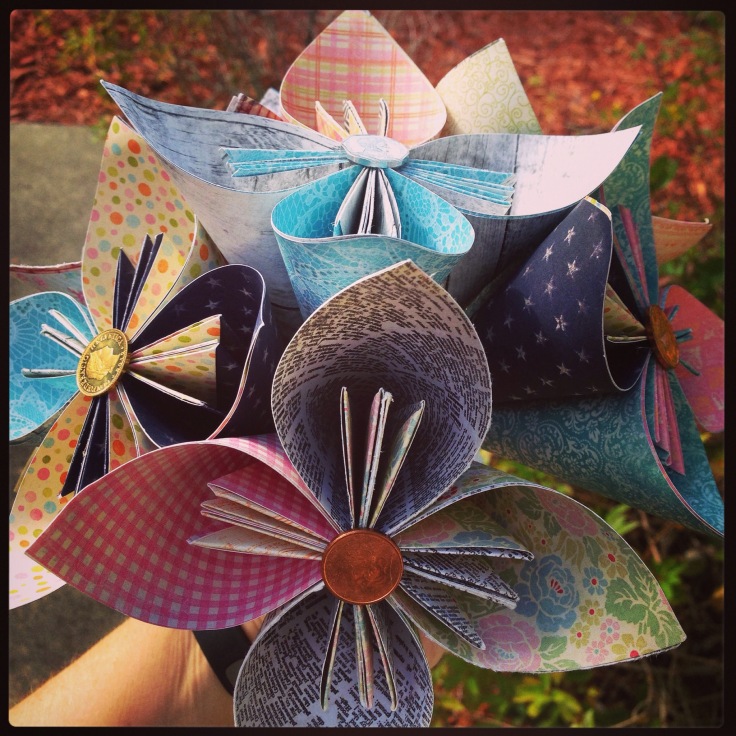 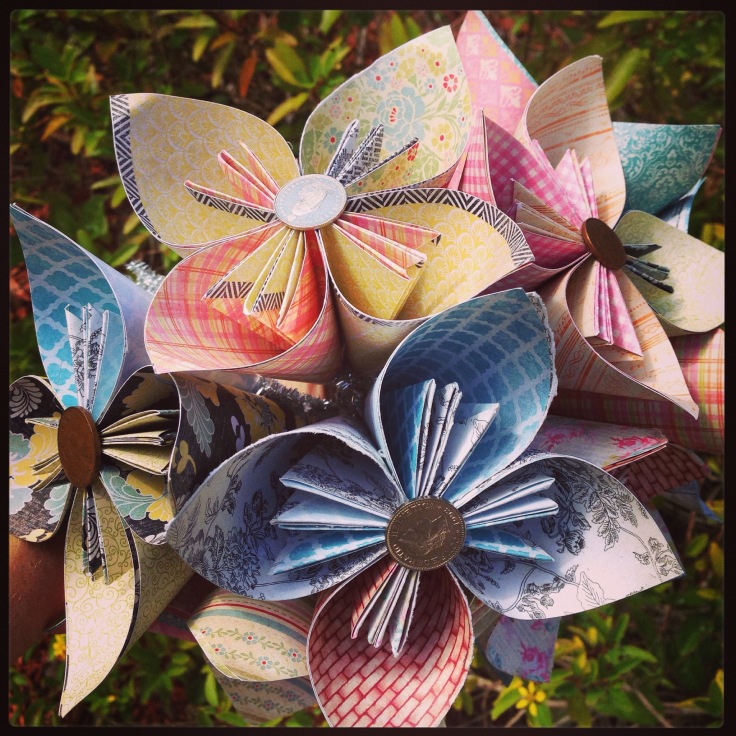