A fun run: No registration fees. No corrals. No bibs. Just a group of folks out for a run. The last purely fun run involving a group of runners without aspirations for bling and weren’t in my immediate social circle might have been with the New York Road Runners during National Running Day back in 2011. Aside from that, all my running has been for training, and as of late, I have neither regularly trained nor run. While talking with one of my long time friends and fellow runners, Meghan, she mentioned a scheduled fun run with Andrea, a mutual running-blogging-yelping-Disney maven. I was all excited at the prospect of lacing up and hitting the streets again, until she disclosed the location. 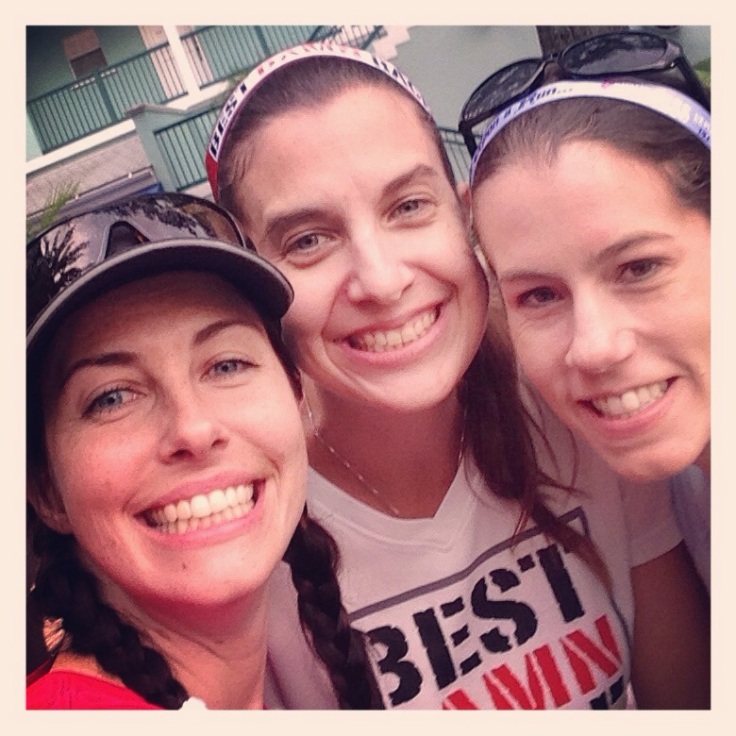 Gator Girls On the Run!

In a break up, folks may lose friends and favorite establishments, but for me, I gave up the entire Town of Celebration. I know it may sound ridiculous. No, the split up was not of cataclysmic proportions. It wasn’t a particularly bad breakup, or at least, I didn’t think so. It wasn’t until I deconstructed that language used, I realized it’s toxicity. Even now, it resonates with mild pain: “You deserve someone who misses you. I didn’t see you for three weeks and I didn’t miss you.”  So while I desperately wanted to explore the town, just the unlikely prospect of that potential awkward meeting caused me to shut down. As far as I was concerned, he introduced me to Celebration, so it was his.

Making new memories, one stride at a time

I needed to get over my ex’s shadow looming overhead, but more importantly, I needed to get the negativity out of my head. I am a mighty fine lady who has a pretty cool life, and it kills me that I allowed old demons rise up and hold me back. I even passed on the opportunity to register next year’s Celebration Half Marathon, for fear I might run into him. If I ever wanted to step foot in Celebration again, I needed to make new memories with my friends. Like climbing into a car again after my freshman year auto accident, I felt trepidation and uneasy at first. I needed to exorcise this demon, so I could run on. Running has always made me happy, and I knew if I dug in hard and deep enough, I could power through. With a little Girl Power a la The Spice Girls, I was ready.

We met up with the Fit2Run Folks at Imperium Food and Wine Bar around 6:45 PM. I learned the night before that “Favorite Race Shirts” would be the theme of the evening. I do love a good theme, but the problem is that I have so many race shirts, it was difficult to simply pick one. As the group run is organized by the Downtown Disney store, picking a Disney-themed running shirt seemed too predictable. A few days prior, both Meghan and my sister, Susie, surprised me with Sweat Pink laces! While they certainly draw more attention to my first edition runDisney Mickeys, it certainly helped narrow down the potential fashion options for the evening.

Flat Runner, it’s been a while…

At the mention of “bragging rights” it only left one option in my closet. I dug deep and went back to where running and later racing first started for me: the Nike Women’s Half Marathon in San Francisco, California back in 2010. The magenta tech shirt that started it all. Of all my bling, the one I could feasibly wear to the run without chafing would be my Tiffany Necklace. Since 2010, the registration lottery for the Nike Women’s Running Series has grown exponentially more difficult to get into and the registration fees are well over $180! They expanded, adding Washington DC to the mix, and I would love to tackle that race challenge one day, earning my second Little Blue Box. 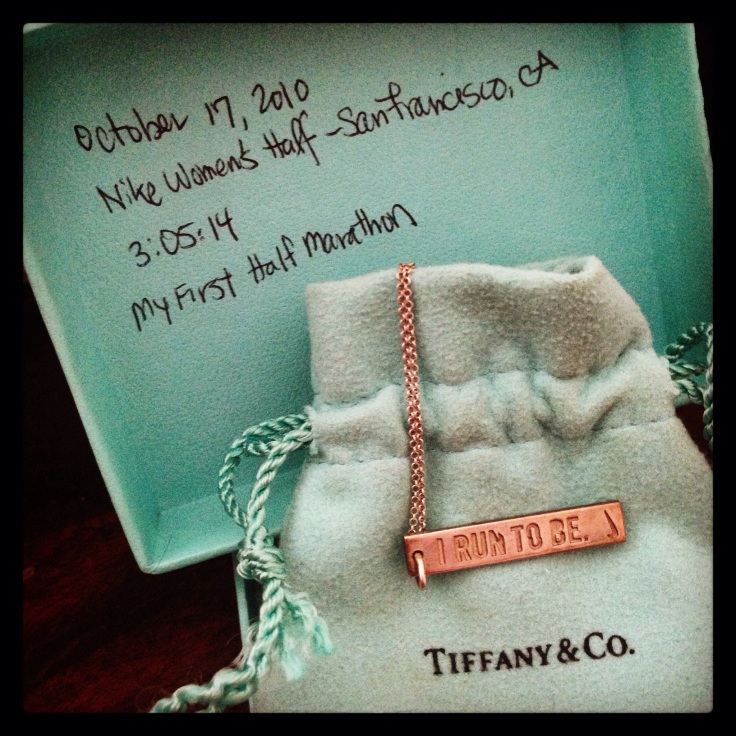 In January, my runDisney/NewBalance Mickeys will hit their two year mark and will need to be retired from racing. They’ve been to Japan, Canada, multiple cities in Europe, and Chile, and while I don’t know the exact milage, I am certain all the suitcase time paired with roads and treadmills are making them better for streetwear at this point. I really like the design and support of the NewBalance 860v4s, so the biggest question at this point is selecting a color combination.

I can tell that it has been far too long since I’ve regularly trained as preparing for my run was akin to a scavenger hunt. My Garmin 610 and running shoes were in one suitcase; my heart rate monitor and arm band for my phone in another. I had to dig through several large boxes for my running visor, and I wound up wearing a pair of running socks that were my third choice. Note to self, “I have four halves to run between now and the end of March. Not only do I need to get back on that training plan, but take time to inventory current items and store them separate from the other clothes.”

As Meghan and I carpooled, we battled the rain. Celebration isn’t exactly a stone’s throw away from East Orlando nor the Greater Daytona Beach area. September in Florida tends to get lumped into “summer” as it is very much part of Hurricane Season and is by no means exempt from the heavy rain showers, thunder, and (eep!) lightning. Driving down I-4, we were searches for patches of blue sky and praying the dark clouds dumping waterfalls throughout West Orlando would give us a break. We had a healthy laugh when we found a clear patch and then less than a mile ahead of us, cars suddenty vanished in a wall of water!!

We were unsure if the event would be canceled. Typically group runs are either well organized or a three ring circus. Luckily, the Folks at Fit2Run (DTD) have their act together. The rain stopped around 6:50PM, making our 7PM start time a big, green light! We started out front of the Celebration Hotel, and worked our way around the lake toward the trail. With the ground slick with rain, we took it easy, especially on the wooden bridges. They were placarded with “Bridges may be slipper at any time.” Any time?! Talk about a recipe for disaster as all three of us are self-proclaimed klutzes with dexterity deficiencies!

One thing about being “an indoor cat” (heavily relying on hotel gym treadmills) when it comes to my training was being quickly reminded how much I struggle with running in humidity and heat. The air was heavy with post-rain humidity, making it hard to breathe. This renewed my firm stance that I will not run half-marathons during summer months, and for Florida that pretty much rules out the end of March to the end of September. My lack of consistent training made me feel like I was starting all over from square one. There was a bit of personal frustration at my lack of discipline and permitting myself to get quite lackadaisical in my training. Conversely, I was thankful that Meghan paced me the entire time. She really kept me going and thankfully, I didn’t cry in front of her.

As we were bringing up the back of the pack and both of us were unfamiliar with the path, we missed part of the course. Personally, I was relieved because by the end I was having more difficulty breathing that I would have liked to admit. In recent months, I’ve regained some weight, including some in my chest, making running at my previous pace a challenge. I need to make an action plan, so I can be in better shape for the Avengers Half in November, and shoot for shattering that 2:45 personal record at the Best Damn Race at Cape Coral in December. Then I can work toward that sub-2:30 half with my 2015 races in January (Star Wars Rebel Challenge) and March (Publix Savannah Women’s Half).

After we finished up with Fit2Run, the three of us do what good running Yelpers do, and went to dinner. With such a large group staying at the Wine Bar, we decided to enjoy at more casual ambiance and patio seating at the Celebration Town Tavern. The only time I had ever been at CTT was for brunch the day after the WDW Half in January, so is was nice to enjoy it post-run with my girl friends and fellow Disney runners. I relished my Boston Cream Pie Martini and devoured my Bison “Burgah” and Sweet Mashed Potatoes like it was feeding time at the zoo. Everything was great, but the best part was Andrea suggesting that we make this a regular outing together. Since I’ve moved to Central Florida, I’ve had trouble finding a run group that would tolerate my bizarre schedule. I’m really happy that I am rediscovering my love for running with supportive friends.

My kind of Boston Cream Pie

I cannot thank Meghan and Andrea enough for allowing me to join up with them. These incredible ladies hold multiple running ambassadorships including Fit2Run, Sweat Pink, & Best Damn Race. When I became involved in running, I dreamed of achieving their level, so being able to finally join them for a run inspired me to return to basics. Lace up. Get out. Run. Perhaps one day, I’ll be able to be active in the running community, but for now, I just need to focus on getting outside, and putting one foot in front of the other. I hope that my friends living near Celebration will consider joining up and logging those extra miles!

Make sure you check out Meghan On the Move & Once Upon a Run as these ladies love to run, eat, and live their lives fully!