So a Japanese girl, a Puerto Rican girl, and an American girl walk into a bar… and another bar… and another bar… There is a joke in there, I swear. When my schedule first came out, I treated myself to a little extra work, so I could as a result, have a little more play time. Picking up Madrid turned out to be one of the best work decisions I made all summer long. I made two new friends and had a blast. 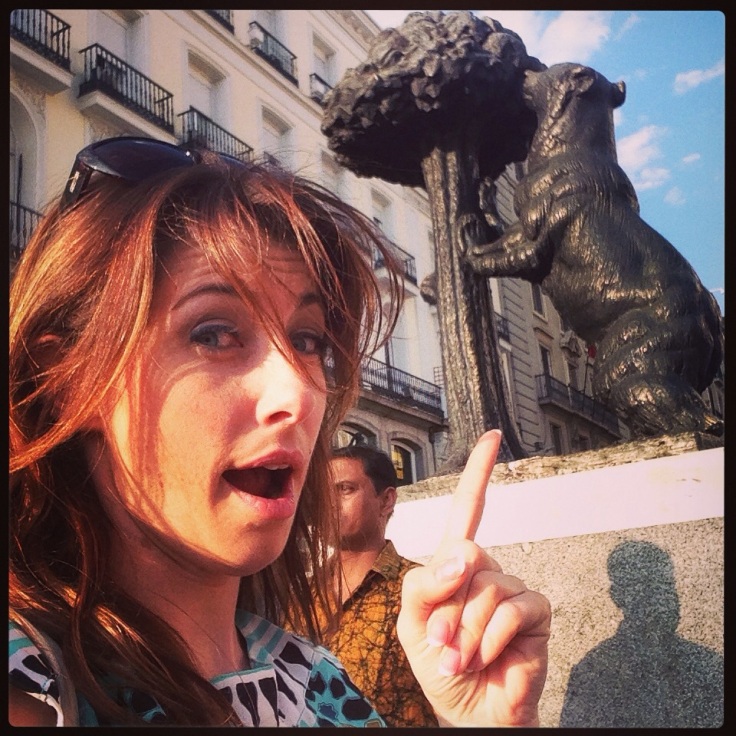 The Bear & The Maiden Fair 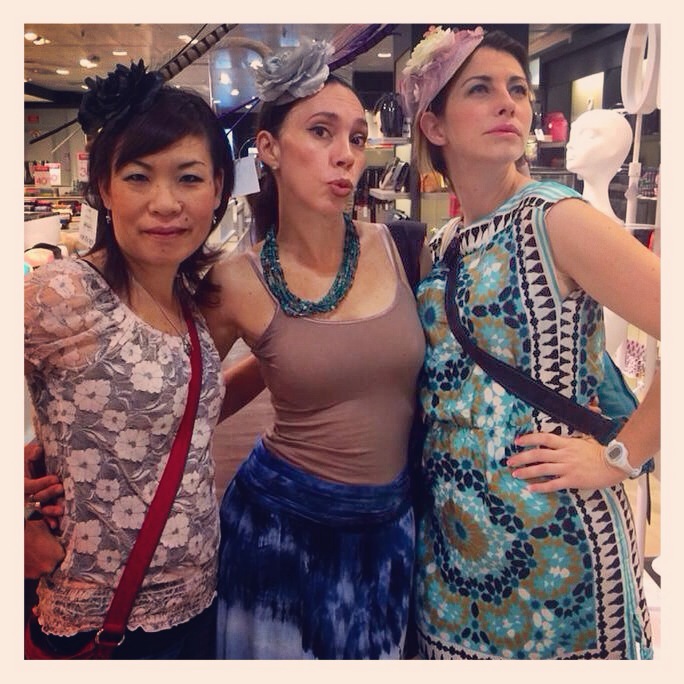 I met a funny, Japanese speaker, Suki, and an even funnier, Spanish speaker, Sandy, and these ladies truly made my visit memorable and fun. They helped transform my visit into a mini-Girls’ Night Out, despite having two of our pilots in tow. After we got a little retail therapy out of the way, we returned to the hotel to drop off our things and meet up with the crew in the lobby. The pilots and a couple of other flight attendants were enjoying beers and snacks at the lounge. They pulled up chairs for us ladies and we ended up with two for one beverages to start out the evening. I have a penchant for Spanish almonds with olive oil and sea salt, so next time, I need to remember to buy the items from the market so I can make my at home happy hour a little more international.  Two pilots joined up with us, and we headed to Plaza del Sol via bus!

The bus ride into town was rather scenic, but what I loved is that they have free WiFi which is perfect for the struggling international traveler trying to get in touch with home (or to start bragging on social media). 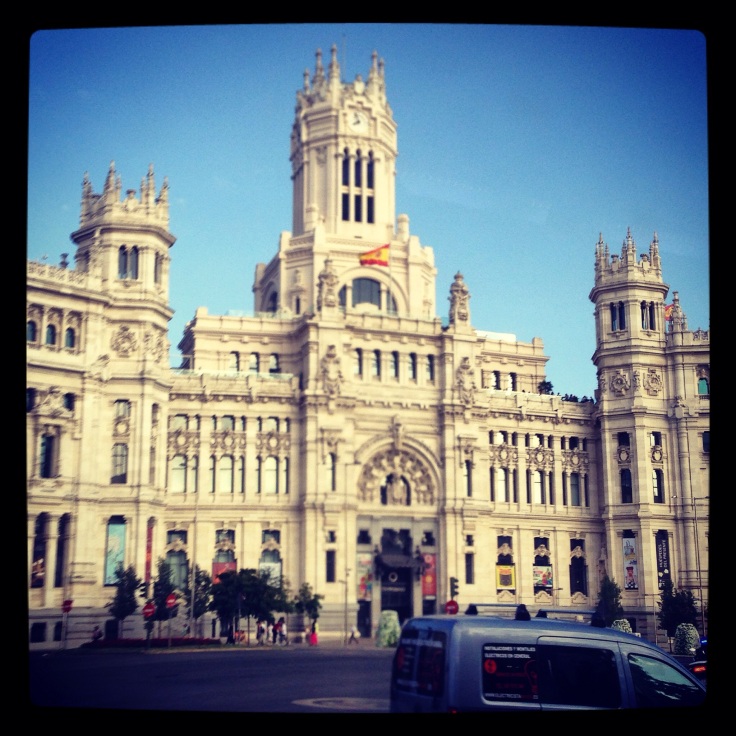 Our first stop of the evening was for beers and some of the best ham in Madrid at Museo del Jamón, The Ham Museum. The beer was cold and inexpensive, the ham slider appetizers were free, and there were legs of cured ham everywhere. Every. Where. They have a wide variety of cures and aging, so there is a little variety for all the carnivores out there. For those wanting to tote some ham home, bring your Euros and muscles because these little piggies aren’t cheap and they are by no means light weights either. 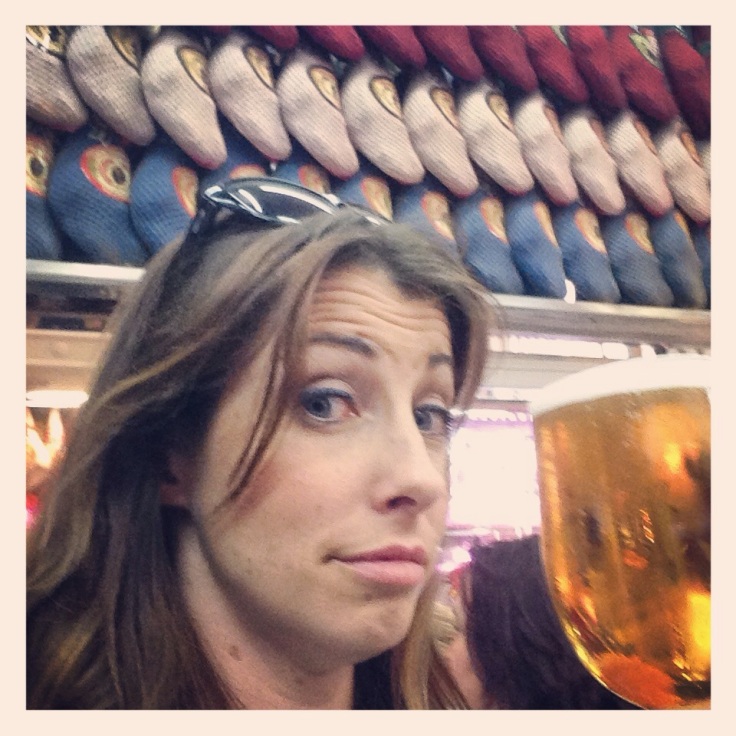 La Torres del Oro ~ Bar Andalú, “The Bull Bar”, was our next stop. With the sun lazily slinking down, the post-work commuters were starting to mingle with the tourist sect and Madrid was waking from it’s siesta and come alive. Our little band of five wandered along the cobblestone walks and stone archways to Plaza Mayor, and we came toe to toe with one of the best kept secrets in all of Madrid, The Golden Bulls. 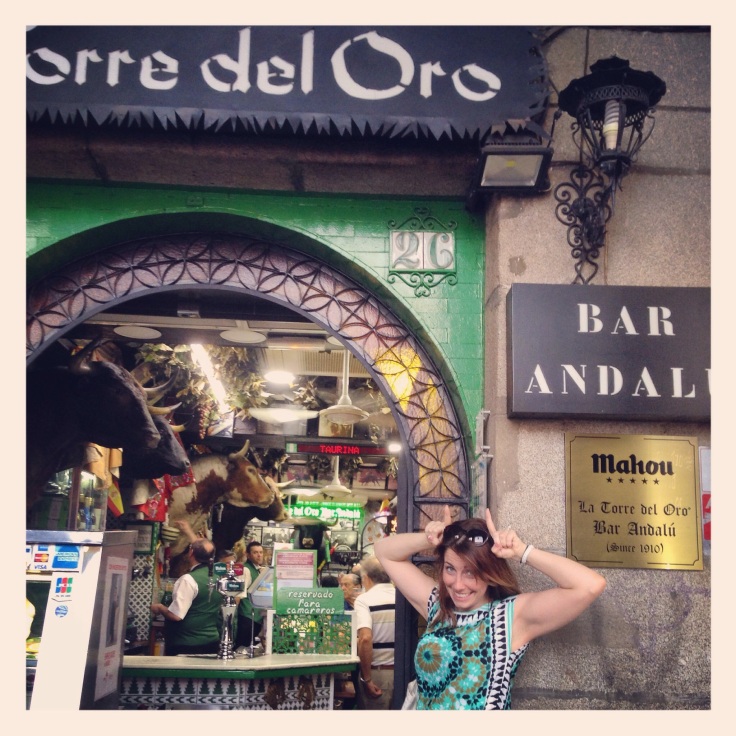 When you mess with the bull, you get the horns!

Our tour guide, Sandy, hit the mark with Bar Andalú. The cozy, counter service bar had great wine, delicious homemade tapas, and some of the most charismatic bartenders I have ever met! They charmed us with witty banter and made us feel like welcomed, long-time friends. There is something comforting of connecting with the people in the places I visit. It may sound silly, but seeing people throw their passion into their work truly resonates with me. Despite my inability to speak Spanish, the moments when we laughed, it reminded me of when I was first learning Japanese. I had forgotten that communication isn’t just lingual. It’s a wink, a handshake, and a smile. It’s putting genuine emotion into the situation without simply going through the motions of social convention. When it was time to go, the older gents behind the bar kissed the top of our hands. Talk about a classy gesture from a time long gone. When we entered, one said to me that although this was my first visit, it most certainly would be my last. He’s right. 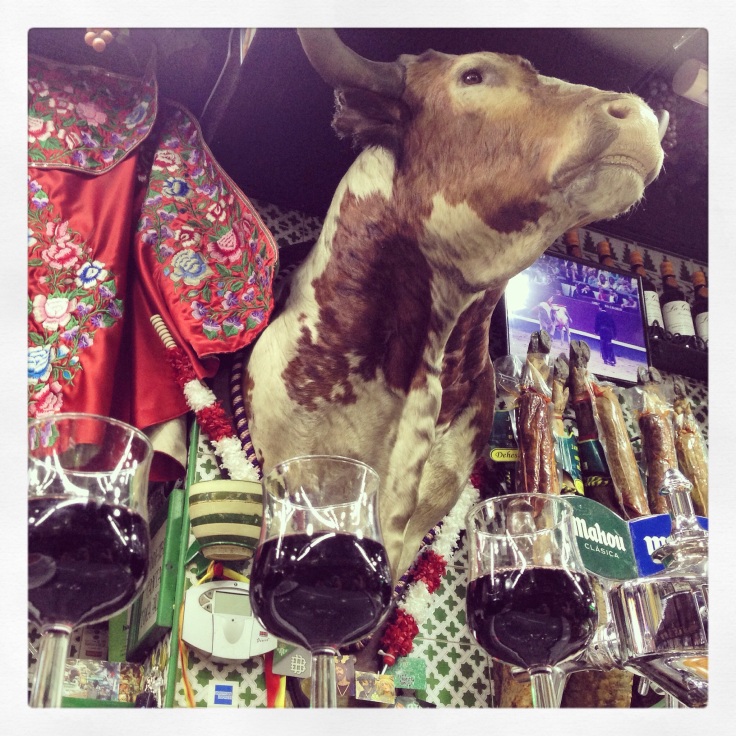 One of the Golden Bulls and fantastic Toledo Red!

Warning: I wouldn’t recommend bringing those with a weak stomach or your token animal advocate along, as well, there are several taxidermy heads of some of the most famous bulls as well as photographs of the damage they did to some rather unfortunate Matadors. Thankfully, they also have post-op survival photos of the bull fighters. Personally, I have a rather solid stomach, and felt my hand go to my mouth to cover an audible gasp when I saw some of the photos. On the flip side, the assortment of capes, swords, and costuming are beautifully displayed and maintained.

I’m moving in to a Mushroom House!

The vegetarians or veggie-lovers out there will adore the next stop: Mesón del Champiñon, House of Mushrooms. While they have a formal seated dining room, we simply saddled up at the bar for what I can only described as the best sauteed mushrooms and peppers I have ever had. Seriously. Without a doubt. The recipe’s simplicity for both is the key to their success. We devoured tiny plate after tiny plate, all fresh off the flat grill. Burning mouths be damned, we had cold beers to offset the heat. I could easily become a smurf and live in this mushroom house so long as they teach me how to cook and the beers are free. I’ll have to ask my friends what the proper names of the dishes we had, so I can start building my vocabulary!

He makes it look so easy!

After having a crazy multilingual conversation with some South Korean tourists, we bid the Meson adios and continued along our way. Our next stop wound up being the Merdaco de San Miguel, “The Market”. I must make it a point to venture out early in the day, so I can fully enjoy the entire glory of this food and beverage paradise. What I love is the blending of old world architecture and modern day shopping concept. By the time we arrived at the Mercado, I had ate my weight in ham, mushrooms, peppers, and tapas, so there was very limited room for much else. We dropped by one of the bars for another round of Mahou Clasica beer.

Our evening had one of those “of all the bars in all the world, you walked into mine” moments when a pair of couples who sat in the first class cabin recognized us! Sandy and I worked up front on the way to Madrid, and Suki was the only Asian crew member, so we were easy to pick out in a crowd! I’ve been known to accidentally pass by other crew members when they are dressed in their civilian clothes, so I was floored when the passengers approached us. Talk about a deer in headlights moment! 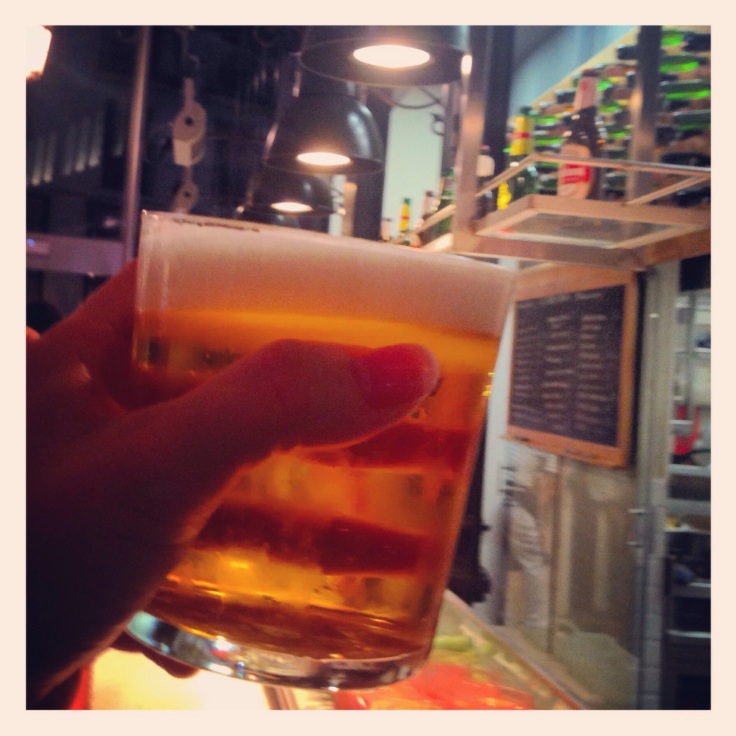 Sometimes, we can’t fly under the radar!

We ended up finishing the night at Los Chanquetes, after discovering the restaurant we wanted to close out the night with was on vacation the entire month of August. By this point, I was undeniably stuffed, perhaps beyond capacity, and quite relieved that I didn’t wear anything tight. Thank God for elastic waists! I started winding down quickly, so I opted for a sensible meal of water and rice pudding. There wasn’t anything particularly outstanding about the dessert, but it with all the alcohol and salt, it was refreshing to have an ultra-sweet comfort food.

Rice Pudding: One of my favorite simple desserts

The only mistake I made while in Madrid was not going to the grocery store before I went to bed. I had intended on purchasing a couple of bottles of wine and some treats to bring home, and when I went the following morning prior to pick up, I learned that the market opened fifteen minutes after we were scheduled to depart. I’ll chalk it up as a learning experience, but at least I snapped up a rather kitsch bottle of sangria at the airport, complete with hat and castanets. It’s a sight for sore eyes, truly.

I had a blast in Madrid. I cannot wait to go back. I am also doing my best to keep an eye on the crew lists because I would love to fly with these ladies again! I am always thankful when I can make memories and explore a city with new friends. My last visit to Madrid was a very short day and a half stop over in 2005, and now I am realizing how much I missed out on! 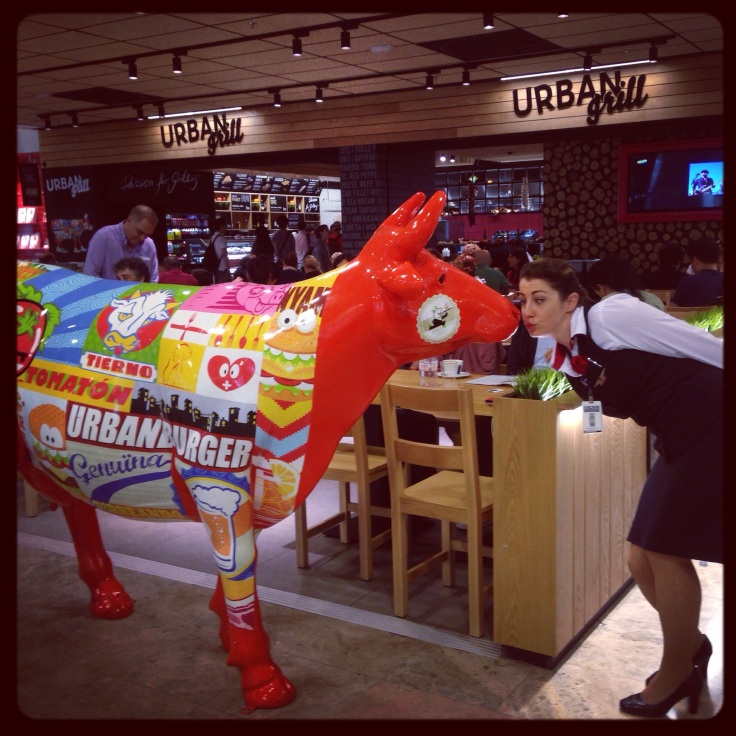